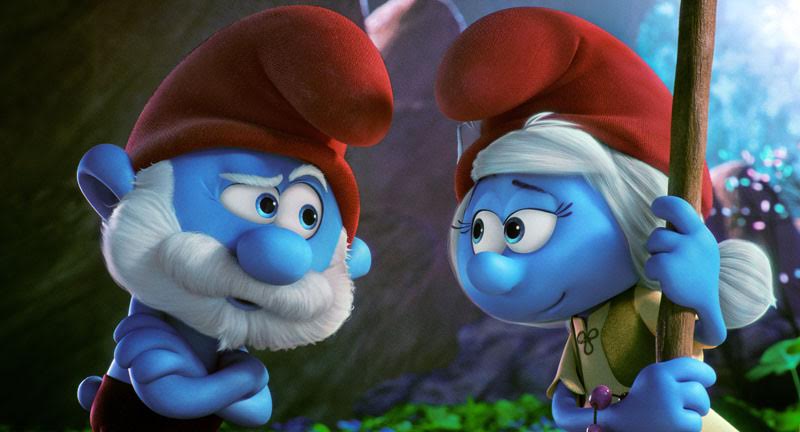 Smurfs: The Lost Village is wonderfully animated, the first good transposition of Peyo's 20th-century cartooning to 21st-century moviemaking. Moreover, it directly tackles the worst things about Smurfs—their creator's banal misogyny—in an effort to make of them a vehicle for progressive values rather than product placement. It has everything going for it.

Sadly, it's not much good.

The Smurfs are tiny blue dudes living in their peaceful village, where from each according to his ability and to each according to his need. They are menaced by the evil (((wizard))) Gargamel. Smurfette, the only woman there, is troubled by the fact she isn't really a Smurf, but rather a golem created by Gargamel to destroy them.

Though now a well-assimilated immigrant, she sets out to explore a forbidden place to find more Smurfs, and is joined by pals Hefty, Clumsy and Brainy to uncover their secret. They are pursued by Gargamel, who is eager to exploit a new population unwise to his predations.

The secret is that the other Smurf village is all-woman, mirroring the all-man Smurf village. Smurfette thereby learns that (a) girls can be whatever they set out to be; and more wokedly that (b) no matter where she comes from, she is what she identifies as. After an inconclusive showdown with Gargamel, then, we at last have a gender-balanced franchiseful of Smurfs to move onwards and forwards with.

The artwork in the new movie (right) is a sharp improvement on the last outing.

In all this, the movie sets out to fix well-understood problems with The Smurfs (and the dire CGI of the earlier movies), but without rebooting it from scratch. Instead, it aims for the clever, elusive trick of faithfully reframing a problematic fave in terms appealing to modern kids and their enlightened parents.

Why doesn't it work? The characterizations are shallow and the humor forced, so nothing on the journey matters and it feels like a psychedelic cat food advertisement, but with blander music—and poor mistreated Azrael remaining hungry.

The cause of this superficiality is not because they pitched it "too young," as some critics suggest. It's because the story leaves The Smurfs in their own world, but the script presents them as creatures of our world. Instead of literally bringing them here, as with the first two movies, or reflecting planet Earth in funny details and scenarios, as in Peyo's books and the Hanna Barbera series, it goes for memes and tropes and a Gordon Ramsay cameo. It takes the contemporary western culture into which The Smurfs was long ago poured like cement, jackhammers it up to find chunks that seem vaguely like the old characters, then crushes them to dust to spread light over 89 minutes.

This is to be expected in the age of Faithful Yet Slightly Ironic reboots, sure. It also erases all the Smurfy subtext in favor of a not-quite-contemporary 'tude. The New Smurfs talk and behave like 80s kids who think they're funny. Mute it and the closed captions read like an uncannily wholesome chat log of thirtysomething gamers playing their way through an online Smurf adventure.

The sort of humor it aims for—in one scene a Smurf has a PTSD freakout in a cave while muttering about being drawn to the darkness— just isn't the sort of humor that the animation style can express. These tonal missteps are a constant presence.

Despite the enhanced faithfulness to the source material, then, the result feels like those Smurfs knockoff cartoons, Snorks and Paw Paw Bears and what-have-you, all packed with sexless yet heavily gendered characters nattering like knowing Gen-X douchebags, going places where nothing is dangerous and whose emotions come and go like dreams.

Almost every scene seems hackneyed. The Smurfs are "grounded" by Papa Smurf after getting into trouble, but they sneak off to find a secret garden, crossing a frightening yet enticing threshold. They face up to a lethal betrayal, yet are thrown into a watery maelstrom only to be washed ashore and symbolically reborn on the quiet sands of another world. Experiencing this movie is like being beaten unconscious with a plush Joseph Campbell doll stuffed with hard candy. There is a funeral for a featureless blob of clay.

"We're team Smurf and we stick together"

Situating a girl power story in The Smurfs, though, is an incongrously good idea. And it follows through as hard as it can given how tightly pitched it is to the youngest viewers. Smurfette is the protagonist, she is neither a Damsel In Distress nor a Strong Female Character, and she grows from self-doubt to empowerment through agency and growth. That this happens in a Hollywood toon at all is nice work, but it goes even to details. Gargamel's hectoring efforts to break her self-worth, for example, are well-written with a clear aim to arm kids with a nascent understanding of gaslighting and similar manipulations. Bravo.

There are good lines, too: "If you've never flown, how do you know if it's your thing?" one femsmurf quips. "I can't take you seriously with that mask on your face," says Smurfette, dragging stupid men who can't let go of their bullshit even as they relax around women for the first time in their lives.

I'd go as far to say that all would have been forgiven if there was a scene where Smurfette rams a harpoon into Gargamel's face, tears off his jaw, then dumps his corpse on a truck. But you can't have everything!

Some tricks were missed. Smurfette is still presented as an angry brunette harridan "made good" by the adoption of a nice smile and a Nancy Sinatra wig. The cunning use of names—the guys' being adjectives generally derived from verbs (Handy, Hefty, Brainy), while women are nouns (Storm, Willow, Blossom)—is posed as "women are not defined by their names" but, well, I daresay they didn't think that through. Elfquest subverted that trope better, and it did it almost 40 years ago. Yet here it is again, served up as animated fruit salad in 2017.

Smurfs 3: The Lost Village is a traditional second-wave parable—girls can do anything—whose dramatic failures boil down to its sanitized relationship with pop culture, the use of ill-considered representations rather than well-dressed metaphors.

Take Cop Smurf, for example, briefly seen shaking his hot gay hips like the Village People. Though more honestly queer than Beauty and the Beast's "unambiguously gay moment," it's no less disappointing in its winking distance from people who might like to be seen as characters rather than glimpsed as tokens. It's all so very liberal, the removal of weakly-coded subversion in all-ages entertainment in favor of strongly-coded innuendo.

By landing in 2017, though, even the most sugary and inoffensive feminist messaging seems to have a radical quality to it again. So if the shortcomings of Smurfs: The Lost Village's revolutionary praxis emerge when we cons... wait, what the fuck am I talking about?

Two and a half stars

P.S. the glowbunnies are fabulous and should get their own movie.

The one good review, from Variety’s Scott Foundas, could not rescue Smurfs 2 from a weak domestic opening. But it’s doing OK abroad, and its $150m production budget was reportedly covered in full by product placement. The advertising is incessant, say reviewers: from Gargamel’s everpresent tablet PC to a duck that “urges a strolling couple […]

A smurf in the Andalusian village of Juzcar, near Malaga, southern Spain. Photo: REUTERS/Jon Nazca In 2011, painters coated the picturesque Spanish village of Juzcar in the smurfiest blue they had, all to promote the tiny blue creatures’ cinematic debut. This week the town decided to keep the paint job permanently, all thanks to the […]

Early Smurf drawings to be smurfed at the smurfing house

Some of Belgian artist Peyo’s early drawings are headed to the auction house, where they are expected to fetch $160,000 or more. [Reuters]