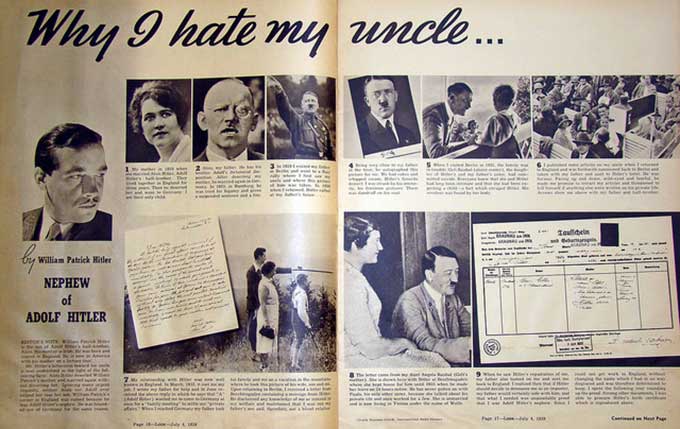 A copy of Look Magazine from July 4, 1939 will cost you $950, because it has a a six-page photo-illustrated feature by William P. Hitler, called "Why I Hate My Uncle."

William Patrick Hitler was born in Liverpool in the UK in 1911. His father was Adolf Hitler’s brother Alois Hitler. William moved to Germany in 1933 in an attempt to benefit from his uncle’s position of power. It appears William, who was familiar with Adolf’s family background, was an embarrassing thorn in Adolf’s side during the 1930s. Moving to the United States in 1939, William served in the US Navy in World War II. After the war, William Hitler changed his last name to Stuart-Houston.

Look’s article is written by William and reveals what it was like to be Adolf Hitler’s nephew. Here are some excerpts:

The July 4, 1939 issue of Look Magazine is scarce with just the single copy listed for sale on AbeBooks. It is offered by Rare Non Fiction, a seller located in British Columbia, Canada.

Look was a rival to Life Magazine, and was published between 1937 and 1971. Prominently featuring eye-catching photography and well known people, Look employed Stanley Kubrick as a staff photographer from 1946 to 1951.

Originally priced at 10 cents, this copy features Hollywood film stars Hedy Lamarr and Robert Taylor on the cover, and also has articles on America’s most wanted criminals, nurses, and horse racing. It is comfortably the most expensive copy of Look listed for sale on AbeBooks.