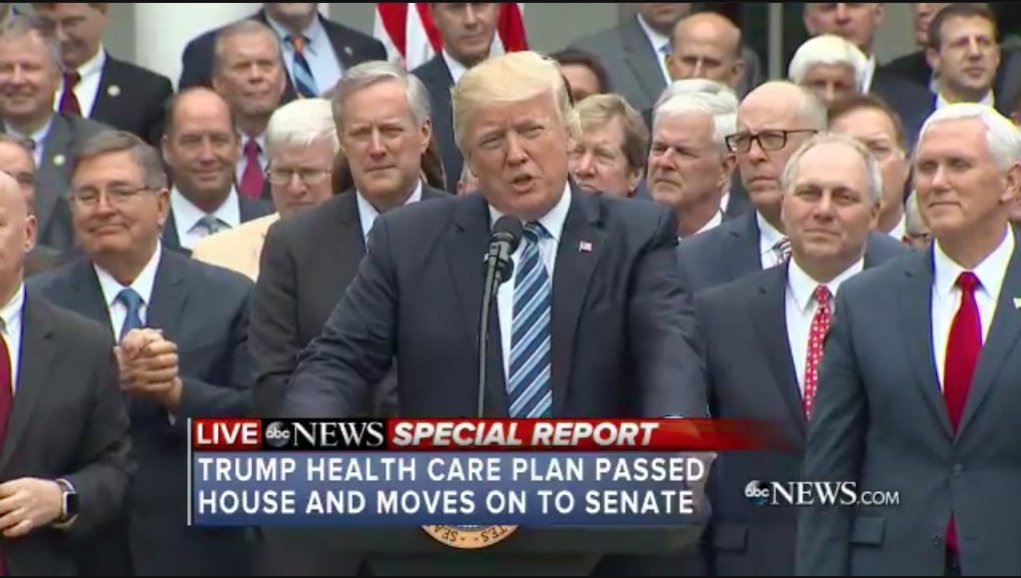 In a 217-213 vote in the House of Representatives, every Democrat and 20 Republicans were not enough to prevent the passage of Paul Ryan's Obamacare repeal bill. The American Health Care Act (ACHA) will reportedly allow insurers to raise premiums and deny healthcare coverage on the basis of pre-existing conditions (including being the victim of domestic abuse or sexual assault, or giving birth by c-section) and amounts to an $880-billion slashing of healthcare services in the form of a tax cut returning mostly to the rich.

The Senate, however, will not need any Democrats to pass it because they are using a procedural mechanism that allows the bill to pass the Senate to pass with just 51 votes instead of the usual 60-vote threshold. There are 52 Republicans in the Senate.

The House measure came to the floor without an updated accounting of how much the bill will cost or its impact. The last assessment, which was done before the bill was altered, said that 24 million people would lose insurance, it would save $300 million and premiums would go down ten percent after ten years.

"It is a concern, but at this point we have to move forward. The American people are clear they want this done, so I think we have to strike when the iron's hot," he said.

The bill must still be voted on in the Senate. Then, assuming it passes, it will be signed into law by President Trump, who had promised before the election to provide healthcare coverage for all Americans.

As the bill passed to cheers, House Democrats sang "hey hey goodbye" to their Republican counterparts, because the only thing that matters to them is the sweet hope that it might be unpopular enough to serve them a political victory in 18 months' time.

Yes. Correct. If your kid is born with pediatric cancer then you pay 100k a year because those are the breaks. https://t.co/3nN8K2Egfy