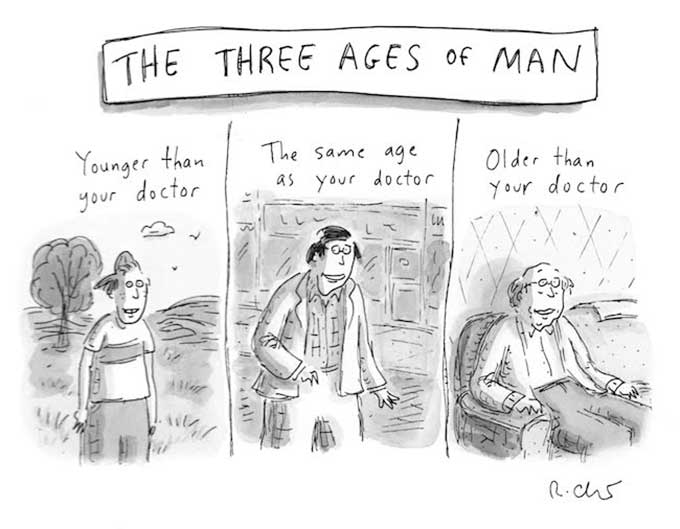 Ben Marks says: "A couple of weeks ago, I was given the opportunity to interview New Yorker cartoonist Roz Chast, who was in San Francisco for the opening of her show at the Contemporary Jewish Museum. Naturally, I felt compelled to ask the author of Can't We Talk About Something More Pleasant? an unpleasant question: How does she manage to get through the day without drawing a cartoon about Donald Trump?

Here's a snip from the conversation that followed:

“It’s difficult not to do that every time my pen approaches the paper,” Chast replies, her mouth immediately contorting into one of her character’s trademark scowls. “He’s such an asshole—such an asshole,” she repeats, almost spitting the words, as if to exorcise a demon that’s taken up unwanted residency in her spleen. “The despicableness of that person trumps every feeling I’ve ever had about a politician. His horrible voice, that stupid hair, the way he pushes his mouth out like that.” Chast purses her lips like a deranged baby duck.

“The courtesy he shows his wife,” I offer, goading her on.

More lightning bolts. “Oh, God, that’s so terrible. That picture of them getting off of the plane—it’s like she’s just a thing to him. I feel terrible for her.” Chast takes a deep breath.

I ask Chast if she’s been taking a lot of deep breaths lately.

“Yeah,” she says, “because I don’t want to think about him that much.” Chast pauses briefly, shakes her head, and then asks, “Do you know he actually said that he got higher ratings than 9/11?”

“Well,” I suggest, choosing the words that follow carefully, “at least he was comparing apples to apples.”

And with that, the furrows in Chast’s brow clear, her frown transforms into a mischievous grin, and a conspiratorial chuckle sneaks out of the corner of her mouth. “Yes, that’s true,” she says with a sly smile.

I’ve just made Roz Chast laugh, and it feels like I’ve won the Pulitzer Prize, albeit in a new, and very nichey, category—Best Joke Told to a Writer’s Favorite Cartoonist. “But my God,” she adds with a quick grimace, “what an asshole.” And, we’re back.

The badly written dystopian fiction that is our global pandemic continues. Sky News: A gang of monkeys attacked a laboratory assistant and escaped with a batch of coronavirus blood test samples, it has been reported. The bizarre incident saw the troop of primates launch their assault near Meerut Medical College in Delhi, India. According to […]