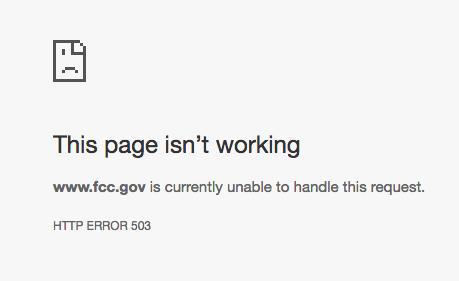 After John Oliver produced another amazing video that called on the internet to tell the FCC not to kill Net Neutrality (and gave them an easy way to penetrate the FCC's thicket of bureaucratic nonsense designed to keep people away), the FCC's website crashed -- a seeming repeat of 2014, when Oliver helped spur a movement that brought the FCC to its knees.

But FCC Chairman Ajit Pai -- telcoms lobbyist turned telcoms regulator, a swamp-dwelling gator of the first order -- says that there was no groundswell of angry internet commenters -- rather, the FCC's website was taken down this time by a denial of service attack.

This "dog ate my homework" excuse reeks of bullshit -- c.f. The Lurkers Support Me in Email -- and Fight for the Future has called on the FCC to release its logs to prove the extraordinary claim that it was targeted for DDoS at the precise moment that Oliver was explaining its nefarious plans to the world.

There are only two possible scenarios for the FCC’s site to go down, according to Fight for the Future:

1. The FCC is being intentionally misleading and trying to claim that the surge in traffic from large numbers of people attempting to access following John Oliver’s segment amounts to a “DDoS” attack. The thought being to let themselves off the hook for essentially silencing large numbers of people by not having a properly functioning site to receive comments from the public about an important issue.

2. Someone actually did DDoS the FCC’s site at the exact same time as John Oliver’s segment in order to actively prevent people from commenting in support of keeping the Title II net neutrality rules that millions of people fought for in 2015.

Either scenario should concern “anyone who cares about government transparency, free speech, and the future of the internet,” the group said.