Yet another white guy cast in a non-white starring role 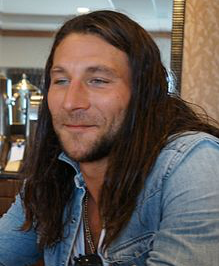 I am going to go out on a ledge and guess there were plenty of actors who could play a physically attractive Pacific Islander. Apparently Hollywood can't find one.

Actor Zach McGowan has been cast as Hawaiian native Benehakaka “Ben” Kanahele in the upcoming WWII film “Ni’ihau,” reigniting the “whitewashing” controversy in Hollywood where Asian/Pacific Islanders are portrayed by white actors.

The film chronicles the true story of the Ni’ihau Incident, in which Kanahele rescued Shigenori Nishikaichi, an Imperial Japanese Navy Air Service pilot who participated in the bombing of Pearl Harbor, after he crashed his plane onto the Hawaii island of Ni’ihau. After Nishikaichi escaped and banded with three local Japanese to terrorize American locals, Kanahele and his wife ultimately killed him. Kanahele, who was shot by Nishikaichi, was later hailed by the U.S. government as a hero for helping prevent a takeover on the island. The incident — as well as systemic racism against Asian Americans at the time — prompted President Franklin D. Roosevelt to issue an executive order placing thousands of Japanese-Americans in internment camps, widely regarded as one of the darkest hours in U.S. history.

McGowan, who has appeared in “Shameless” and “Black Sails” as English pirate Charles Vane, is Caucasian with brown hair and blue eyes. Kanahele was a native Hawaiian with brown skin and dark hair. McGowan’s casting is the latest in a series of “whitewashed” roles.

Purdue cynically created the American opiod epidemic through a combination of bribing medical professionals to overprescribe Oxycontin, publishing junk science, and aggressively lobbying regulators at every level to turn a blind eye to the destruction of the lives of millions of patient; while the company settled a record-setting criminal case, the name of the secretive […]

Rooney Mara has found her guilt regarding her lily-white turn as Tiger Lily in the derided and disastrous Peter Pan prequel “Pan,” which set fire to about $200m all told. Even before Joe Wright’s live-action retelling of Peter Pan hit theaters, the production came under fire for casting Rooney Mara as the Native American Tiger […]