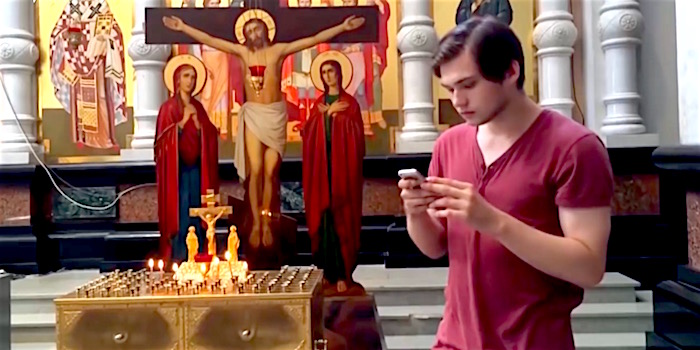 Last year, 22-year-old Russian blogger Rusian Sokolovsky played Pokemon Go inside an Orthodox church and filmed it. The video went viral, which put him in detention since October. Today he was convicted and given a suspended sentence of 3 1/2 years. His crime? Religious hatred, the same "crime" that threw the two women from the feminist punk rock group Pussy Riot into jail for two years in 2012.

The judge pointed out that the 22-year-old video blogger was on trial not only for playing the game in the church but also for posting several videos that offended believers. She listed "mockery of the immaculate conception," ''denial of the existence of Jesus and Prophet Muhammad" and "giving an offensive description of Patriarch Kirill," the head of the Russian Orthodox Church.

Once an officially atheist state, Russia has made a stunning turnaround since the fall of the Soviet Union, with the majority of Russians now identifying themselves as Orthodox Christians. Although most Russians are not observant, the Kremlin has been eager to harness faith to promote its own agenda. The guilty verdict for the Pussy Riot members emboldened radical religious activists who have been successful in their public campaigns to get theater performances banned and exhibitions closed. Last year, activists launched a drive to collect signatures to end state funding for abortion.

Sokolovsky thanked reporters for exposing the story. "I would probably have been sent to prison if it wasn't for the journalists' support."

A bill to repeal Wyoming's death penalty law has failed in the state senate, thanks, in part, to the vote of Sen. Lynn Hutchings [R-Cheyenne, contact details], who said, "The greatest man who ever lived died via the death penalty for you and me. I’m grateful to him for our future hope because of this. […]

An unusual set of tweets from the official IHOP account suggests that the pancake house chain is going to be changing their name to IHOb. They haven’t revealed what the “b” stands for but will on Monday, June 11, the day the name change is supposed to go into effect. USA Today quotes IHOP’s executive […]

BBC Asian Network raised a few eyebrows after tweeting “What is the right punishment for blasphemy?” While it’s clear from watching the video all the way through that BBC’s Shazia Awan is not taking a side, BBC Asia later apologized.