Most European millennials would join "a large-scale uprising" 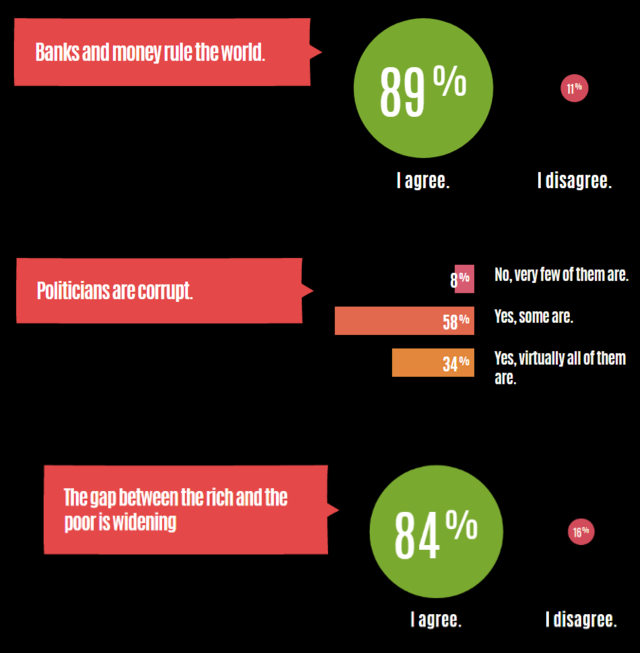 The European Broadcasters' Union polled 500,000 18-25 year olds on the question, "Would you actively participate in a large scale uprising against the generation in power if it happened in the next days or months?" 53% answered yes.

Almost "90% of those polled agreed that "Banks and money rule the world" and that the "gap between the rich and the poor" was widening. More than 92% agreed that "politicians are corrupt" (responses were divided between "virtually all of them are" and "some are"). In Germany, 78% agreed that "nationalism is growing and that this is a bad thing." 67% of all European millennials said they would refuse to fight for their countries in time of war. Nearly 75% agreed that "immigration makes for richer countries."

Asked if he was surprised by the fact that so many young people said they would be willing to participate in a “large-scale uprising,” Grond answered bluntly: “Not really.” He said the poll showed that, despite their skeptical attitude toward social institutions, young people are broadly optimistic about the future, and “willing to participate” in political life. “Society is simply not giving them a chance to show what they are capable of,” he said.

Grond said he was surprised by the broadly felt opposition to nationalism pervasive among survey participants. “78 percent of young people in Germany said that nationalism is growing and that this is a bad thing,” Grond noted. This compared to just 11 percent who said the growth of nationalism was a positive development.