I keep trying to fix my typewriter 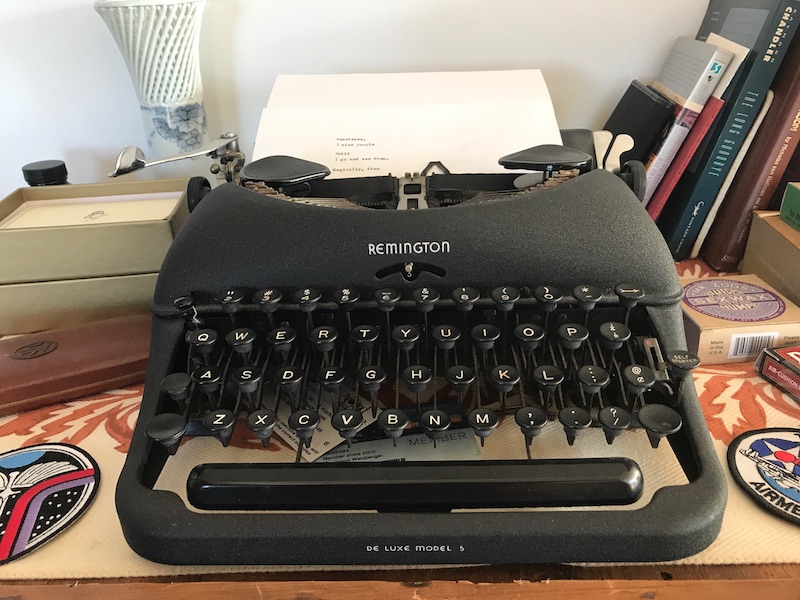 There are few possessions I've held on to like my Remington Rand De Luxe Porta 5. I've been trying to fix it, it mostly works kind of/sort of. OK, I give up.

Usually, I need a story to go with most of the functional art I keep around the house. I can go on and on about when or where I acquired a guitar, or a wooden box, or a magic trick -- but this typewriter just seems to always have been with me. It almost always works.

Every now and then it'd start to stick. I'd blow it out with compressed air. Nowadays the carrier advance isn't working so well, the ribbon doesn't much want to self-wind and I'm starting to think the springs are all just getting tired. I may try to degunk it myself, but I'm resigned to driving across the SF bay next week to drop it off at the last typewriter shop around.

The gentleman in the video cleaned up a nice example of my baby. Mine is serial number B152XXXX in series, and slightly more aged than the one he has. Happily, the finish on mine remains pretty much as I imagine it came from the factory. There is very little rust or tarnish to be found. Sadly, she is just tired, and needs a real tune up.

If the DE LUXE can't be restored to fully working condition, I'll be forced to switch to the Death Star of typewriters: my father's electric 1980s Smith Corona Ultrasonic 450 Messenger.The Smith is easier to use but lacks all the aesthetic pleasure of typing on a typewriter, and reminds me very much of the Audi 5000 he once drove. All the power of a 4 and the gas mileage of a 6.

Jeremy Mayer is a San Francisco sculptor who creates incredibly intricate creatures from torn-apart typewriters. One of Jeremy’s preying mantises has lived in my home for many years and I still marvel at its construction. Wired visited Jeremy’s studio for the short documentary above. For more, here are a slew of Boing Boing posts about […]

Martin Howard from Antique Typewriter (previously) writes, "In 1881, Thomas Hall, a Brooklyn engineer, invented the first portable typewriter that would enable a person to type with the machine anywhere, even on one’s lap. This was also the first index typewriter, a typewriter with no keyboard that requires one to use a selector. In this […]