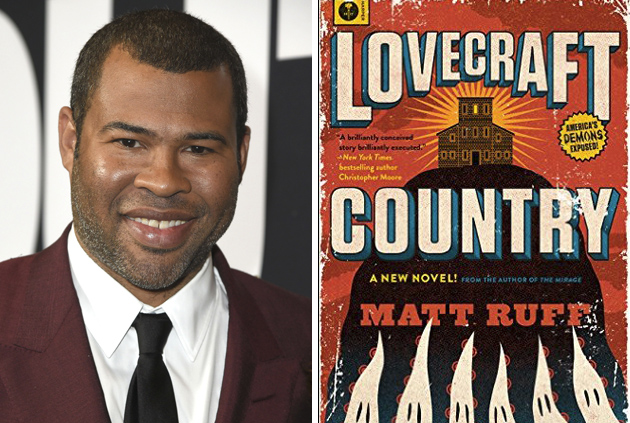 Well, this just made my day: Matt Ruff's outstanding anti-racist novel Lovecraft Country has been picked up for development into a TV show by Jordan "Get Out" Peele, JJ Abrams and HBO.

Matt Ruff is a spectacular and versatile science fiction writer who is perhaps most commonly considered an absurdist, thanks to his outstanding 1988 debut Fool on the Hill, but whose more recent works have highlighted his ability to walk the fine line between funny-ha-ha and funny-holy-shit. The Mirage was one such novel, but as brilliant as it was (and it was), it was only a warm-up for this book, Lovecraft Country, a book that takes a run at the most problematic writer in today's pop culture canon and blasts right through him.

HP Lovecraft, father of the Cthulhu mythos, was, even by the disgusting standard of his day, a scumbag racist pig. Seriously. Even Robert Howard couldn't let Lovecraft's vicious invective pass without comment. David Nickle's novel Eutopia pulled down Lovecraft's pants and showed us all his shame.

The novel involves a large, extended, accomplished African-American family living in Jim Crow Chicago. These characters -- a young soldier, a radical printer, a grifter's daughter turned landlady, a travel agent, a budding comics creator, and many others -- don't need Elder Gods to experience horror. They live it in their daily lives, through harassment, violence, expropriation, and the legacy of slavery that is anything but ancient history for them.

Each character gets their own novella, a series of linked tales that both illustrates, at a visceral level, the terrors of the black American experience, and the family's relationship to another family, former enslavers who are Lovecraftian sorcerers, obsessed with the taming of ancient mysteries and sacrifices to unknowable Elder Gods from beyond our universe.

Ruff inverts the Lovecraft horror, which turned so often on "miscegenation" and the duty of advanced humans to trample those around them in their drive to recapture this lost wisdom (and humanity's lost grace). His Lovecraftian horror is the horror of the people whom the Lovecraftian heroes viewed as subhuman, expendable, a stain on the human race. By blending real history (such as the Tulsa riots) and Lovecraftian tropes, Ruff's characters shine as active protagonists in their own story who have lives, have dignity, and have indomitable spirit that they use to fight back against the power structure that Lovecraft lionized.

In his afterword, Ruff notes that he was inspired by Pam Noles's 2006 essay Shame, about her experiences growing up both black and geeky, and the way her family made her interrogate the portrayal of race in her favorite media. The essay is a must-read, presaging much of the debate underway today.

Ruff started his career as an absurdist, with a light touch that made his debut a breeze as well as a hoot. Though his subject-matter has gained gravity over the years, his touch has, if anything, gotten lighter and quicker. Lovecraft Country doesn't just race along, it tears, demanding that you keep turning its pages without interruption. I read the second half of the book while walking in my neighborhood, holding the book with one hand and clutching bags of groceries in the other, and then finishing up in bed with a small LED lamp after my wife had fallen asleep. It's one of those books.

But on the other hand, there really aren't any books quite like it.