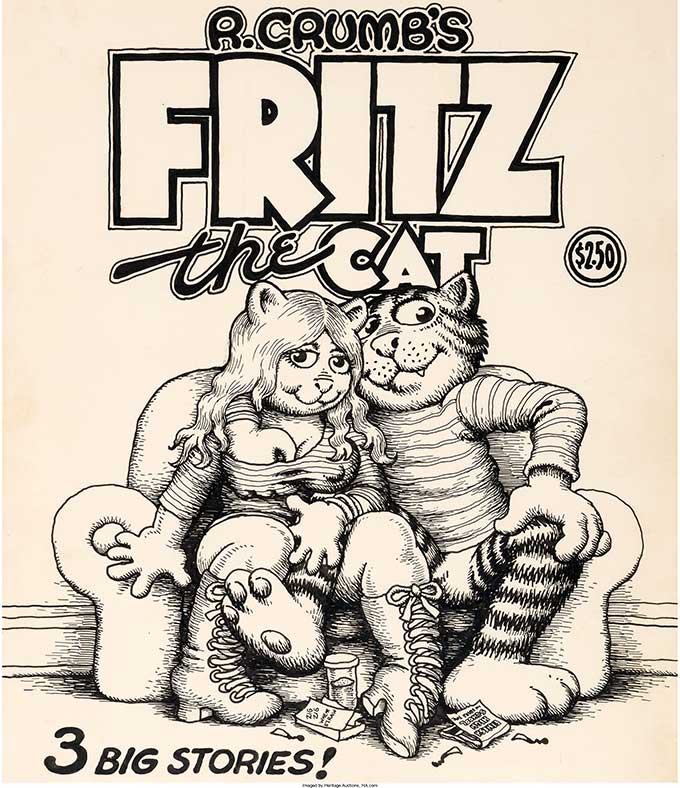 Robert Crumb R. Crumb's Fritz the Cat Cover Original Art (Ballantine, 1969). Fritz gets cozy with girlfriend Charlene in this famous cover image, taken from the oversized collection of stories first published by Ballantine in October, 1969. This book was so popular, it rated a second printing a month later! The image would go on to inspire a popular statue by Randy Bowen and Neil Surges in 2003 that quickly sold out. Fritz himself would go on to star in two feature-length animated movies, Fritz the Cat (1972), and The Nine Lives of Fritz the Cat (1974). Although later abandoned by the artist, Fritz remains one of R. Crumb's most popular characters, one that dates back to the homemade comics Robert was producing as a teenager in the early sixties. This is perhaps one of the most famous and important single pieces of art by Crumb, one that has been stashed away in a private collection for many years. It's sure to be the centerpiece of any collection of Underground Comix art. It's in ink on Bristol board, with an approximate image area of 11" x 12.5", and matted to an overall size of 16" x 20". There is minor outer border handling and edge wear, but the image remains in Excellent condition.

Crumb hated the Ralph Bakshi movie adaptations so much that he drew a story in which Fritz was stabbed to death by his ex-girlfriend. Similarly, Matt Furie drew a story in World’s Greatest Cartoonists that depicts the death of Pepe Le Frog after it had been appropriated as an alt-right mascot.