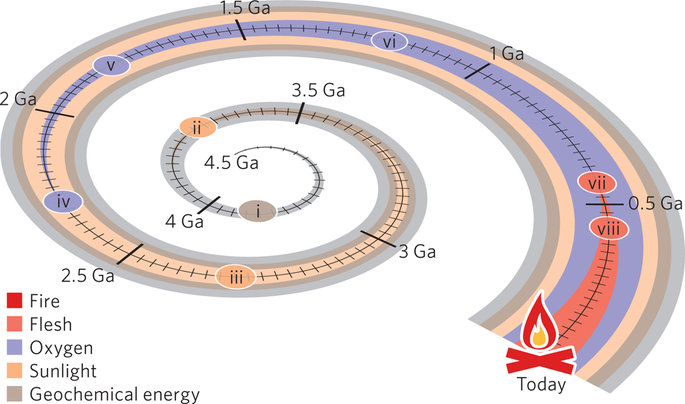 Olivia P. Judson's paper in Nature, The energy expansions of evolution, presents a novel, beautifully written and presented frame for looking at the history of life on Earth: as a series of five epochs in which energy became more abundant and available to lifeforms, allowing them to scale up in complexity and fecundity: geochemical energy, sunlight, oxygen, flesh and fire.

According to The Atlantic's Sarah Zhang, the paper is the result of years of iterative thought and synthesis by Judson, who bounced off of scholars and scientists from many disciplines, rewriting and rephrasing her arguments to produce a paper that is genuinely wonderful to read, at the same moment crystal clear and utterly transformative.

The thumbnail goes like this: geochemical energy (water-rock reactions on the early Earth) gave rise to chemoautotrophs that harvested this energy, which evolved (thanks, in part, to viruses, which serve lots of functions, including gene-transfers) into photosynthetic bacteria that could make use of the Sun's energy. These critters shat out the oxygen that eventually killed most of them, but created the rich, reactive environment that let air-breathers harvest orders of magnitude more energy from glucose molecules. These meaty animals could, in turn, be eaten by other animals, who could, in a gobble, receive the benefit of a lifetime of careful consumption and metabolizing. Then one animal (us) invented fire, which let us liberate much more energy again from the flesh, and voila, abundant life.

No one disputes that ample oxygen is a prerequisite for the evolution of large, mobile animals—that no other substrate provides enough energy to power them. But a major point of contention concerns the role of oxygen in the early evolution of animals164. The question has two parts: how much oxygen was required for their initial evolution, and how much for their spectacular and rapid diversification, more than 200 million years later, at the start of the Cambrian?

The answer to the first part is: not much165. Like the earliest eukaryotes, the earliest animals may well have had mitochondria that were faculatively anaerobic78,165, and thus would have been able to persist in environments where oxygen levels were low or unstable.

However, low oxygen limits animal ecology in several ways. Without a good supply of oxygen, animals cannot grow big or move fast: they cannot get enough power. A neat demonstration of this comes from work by Sperling and colleagues166. Using data from modern oceans, these authors showed that in low oxygen regions, there can be plenty of animals, but they tend to be small and passive. Active predators—flesh eaters—only appear once oxygen levels become more moderate. Another point to note is that without access to oxygen, animals cannot make collagen, one of their main connective tissues. Without collagen, they cannot leave body fossils72.

Such observations have led a number of authors167,​168,​169,​170 to wonder whether a rise in oxygen permitted the Cambrian Explosion by releasing an important evolutionary constraint. Although evidence for a rise in atmospheric oxygen towards the end of the Proterozoic is mixed (and disputed), it seems that parts of the deep ocean became well oxygenated around this time, leading Lenton and colleagues171 to suggest that—even in the absence of a rise in atmospheric oxygen—the activities of the earliest animals could have facilitated the oxygenation of the oceans, which in turn could have facilitated the evolution of larger, faster, hungrier animals.