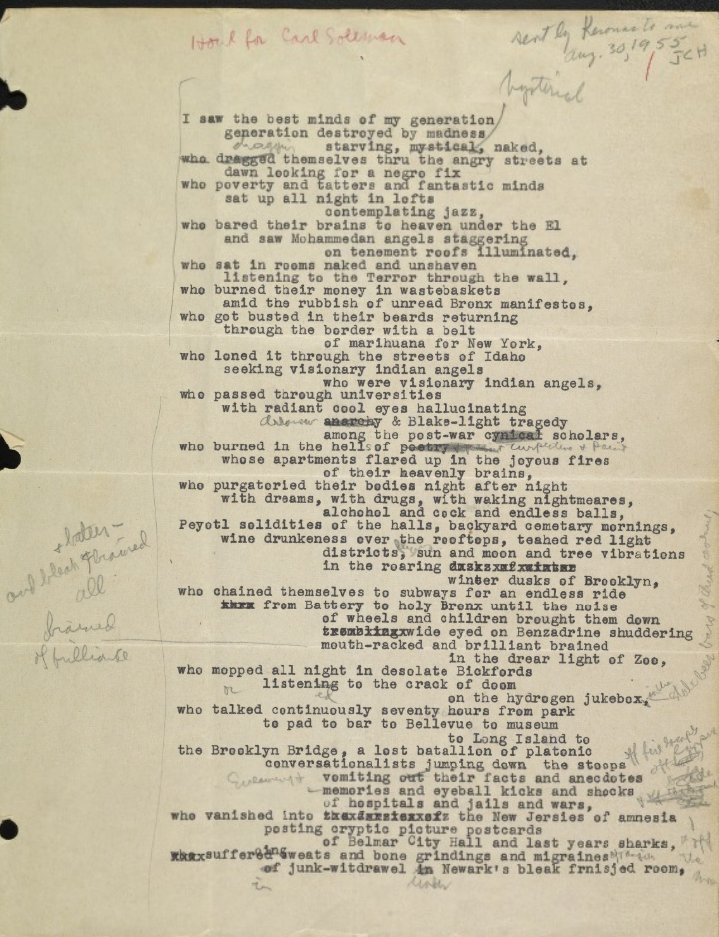 Ginsberg's HOWL isn't merely a masterwork of poetry, nor is it merely a classic; it is also an indelible part of American free speech jurisprudence: when US Customs seized copies of the poem on their way into New York from the British printer's presses, the resulting obscenity trial made history.


Now, Stanford Libraries has digitized and posted scans of all known drafts of HOWL. They are encumbered with a regrettably clunky and difficult-to-navigate viewer, but if you put it in fullscreen mode and zoom in, you can see a whole page at a time. Regrettably, there's no way to compare multiple pages, which makes it very difficult to make best use of the multiple draft repository.

With its famous opening line, obscure references to fellow Beat writers, and graphic depictions of drug use and sexuality, Ginsberg’s poem railed against the conformity of 1950s America. Ginsberg continued to revise the first section of the poem in the fall of 1955 and began work on the second section of the poem, before doing his first public reading of the poem at the Six Gallery in October. Ginsberg’s reading of the first part of “Howl” at the Six Gallery is now part of Beat lore, memorialized by fellow Beat writer Jack Kerouac in Dharma Bums.

The first draft of the poem is the beginning of what would become a longer poem, consisting of three inter-related sections and a final “Footnote.” The “Howl” manuscripts and typescripts in the Allen Ginsberg Papers document the formal development of the poem, tracing Ginsberg’s experiments with different structures and wording in each of the poem’s sections. Below is Ginsberg’s first draft of part two of “Howl,” which he wrote at the bottom of a typed draft of part one.

When the full text of the poem was published in 1956 by City Lights Books, it launched Ginsberg’s literary career, along with his notoriety. In 1957, US Customs confiscated copies of Howl and Other Poems, when they arrived in New York from the printer in England. Months later, City Lights owner Lawrence Ferlinghetti and bookstore manager Shig Murao were arrested for the publication and sale of the book, setting the stage for what would become a high-profile obscenity trial.

Prominent writers, critics, and academics, including Kenneth Rexroth, Walter Van Tilburg Clark, and Mark Schorer, defended the literary merits of the poem at the trial, leading Judge Clayton Horn to rule that the poem was not obscene. Ginsberg’s public readings of the poem and the publicity surrounding its publication cemented the Beat Generation in the public imagination and set the stage for the 1960s counterculture that followed. In partnership with the Ginsberg Estate, Stanford Libraries is pleased to share this seminal piece of the Beat Generation and an American literary classic.