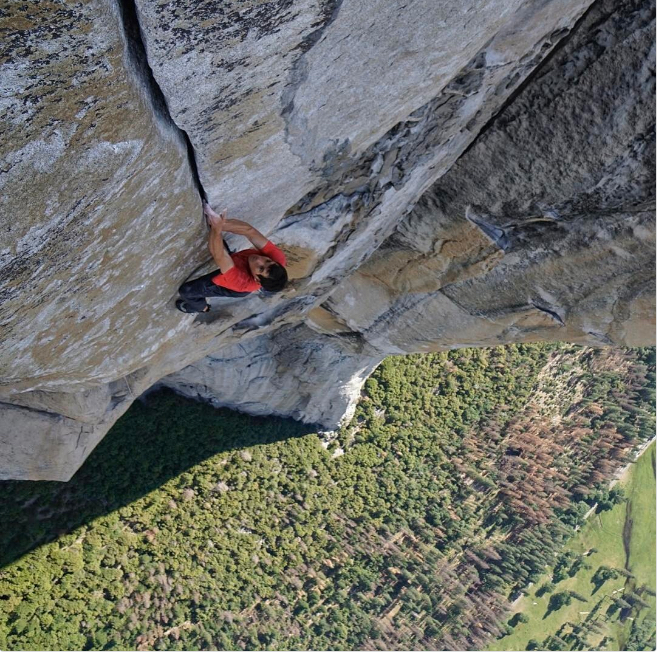 @alexhonnold composed and casual free soloing (sans cord) 2000ft above the deck on the Enduro Pitch of Freerider yesterday. Alex's process to prepare for his dream of free soloing El Cap has been an incredible, and sometimes stressful, journey to witness and be a part of over the last two years while filming him for a feature documentary (co-directed by @mochinyc). In some ways I expected (and prayed for) nothing less on his big day but it was still mind bending to see how relaxed he was in the final days leading up to the climb and of course during the climb - as seen here locked off reaching full extension with mere finger tips in contact to granite, feet smeared on nothing. What I've learned over the last 10 years about Alex is he isn't the kid that shows up to do well on the exam. If it counts, he's there to ace it, knock out the extra credit questions and finish early. I'd say he aced his final exam yesterday with extra credit for style and composure. When he got to the top, he looked at me and said "I'm pretty sure I could go back to the bottom and do it again right now." Congrats bud. You crushed. It was historic, it was brilliant, it was moving beyond words. Thanks to all of Alex's climbing partners who supported along the way and especially to one helluva film crew for staying committed through thick and thin doing some of the best work I've ever seen. So so proud of everyone. See the @natgeo link in my bio for more.

The ascent usually involves stopping overnight with gear. Honnold tried not to wake up some sleeping climbers he passed on the way up. Via NPR:

"I woke up one guy and he sort of said, 'Oh, hey.' Then when I went by, I think he discreetly woke up his buddies because when I looked down they were all three standing there like 'What the f***?' "

By conquering El Capitan, Honnold fulfilled a goal he had worked toward for years. He first wrote about the potential record-setting climb in his journal in 2009 — but he repeatedly found reasons to set it aside, as he said last year on the Basecamp podcast with Gripped editor Brandon Pullan.

"Obviously, that's like, the thing to do," Honnold said when discussing El Capitan with Pullan in 2016, adding, "it's always seemed really scary."

Here's another shot he took, posted by NatGeo:

Photo by @jimmy_chin | Renowned rock climber @alexhonnold climbs Yosemite’s El Capitan on Saturday making the first rope-free ascent of the iconic 3,000-foot granite wall. It is arguably the greatest feat of pure rock climbing in the history of the sport. He ascended the peak in three hours, fifty-six minutes, taking the final moderate pitch at a near run. Under a blue sky and few wisps of cloud, he pulled his body over the rocky lip of the summit at 9:28 a.m. PDT. A team of filmmakers, led by @jimmy_chin, one of Honnold’s longtime climbing partners, and Elizabeth Chai Vasarhelyi, captured the ascent for an upcoming National Geographic Documentary Films feature. You can read Mark Synnott’s exclusive account of the climb, which was more than a year in the making, on nationalgeographic.com or by swiping up on our Instagram Story. #history #elcapitan #yosemite