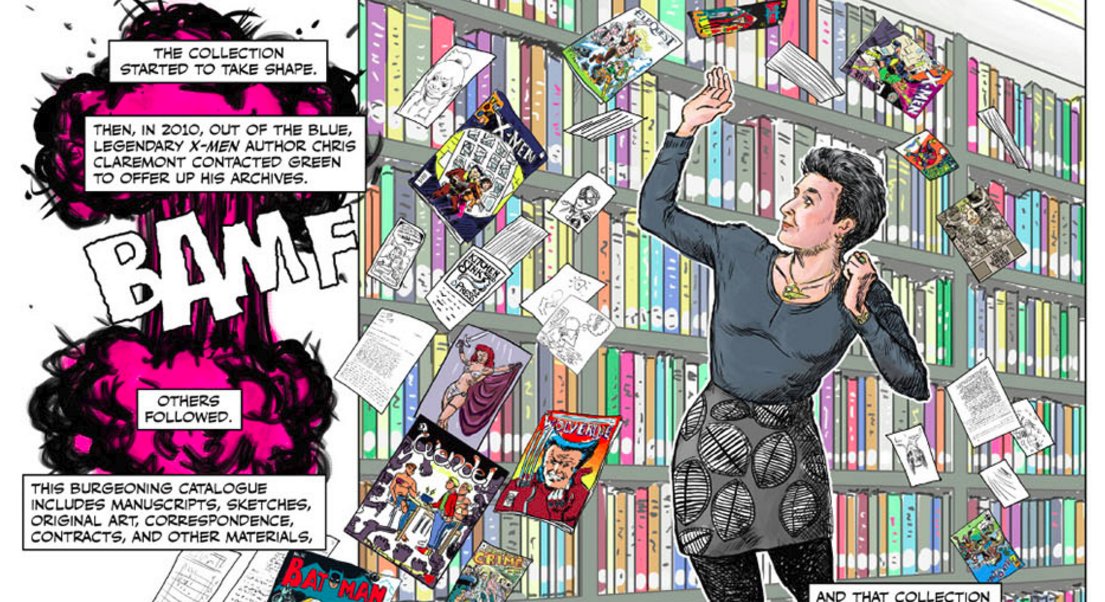 Nick Sousanis is the comics creator who broke ground in 2015 by being the first doctoral candidate to submit a dissertation in comics form and ever since, he's been doing wonderful nonfiction work in the form, on subjects ranging from entropy to climate change to elections.

His latest is a biography/profile of Karen Green, Columbia University's first-ever curator for comics. It's the story of how Green kindled a love-affair with comics as a child and the journey that brought her into her current job, told rather marvellously in the style of different comics-creators who made an impact on Green.

Ok, excited to share my new comic – profile of Columbia University’s comics librarian extraordinaire Karen Green – done in comics for Columbia Magazine! While only six pages long, this proved to be a huge undertaking – i was working on it December through March, and it was just published this week. When first approached to do this project, I was hesitant. Although I’m good friends with Karen and she was a great colleague while I was doing my doctoral work, biographies are not really the sort of comic I make. But then I got the idea to tell her story through homages to all the comics she read growing up and through adulthood – and that got me excited for the challenge (I did do one autobiographical piece a long time back that touched upon somewhat similar terrain). And it was a challenge – the amount of reference material for this short piece are kind of ridiculous but once you’ve committed to this path – can’t really stop walking. The comic draws on her lifelong fascination with Alice in Wonderland in a few places, the New Yorker, the Bayeux Tapestry, Archie, Little Nemo, Charles Burns, and the crowning achievement of the piece – a riff on Al Jaffee’s legendary Mad Fold-Ins! (See a recent interview with Jaffee here.) Although this final page was the quickest to draw in the end, it was by far the hardest to figure out. I had to take words that she’d said in a text interview with her and my follow up questions and have them somehow fold into her advice on how live your life with equally meaningful imagery! I was thrilled to finally hit upon a solution (and trying to make one of these should give you huge appreciation for Jaffee’s genius in figuring these out month in and month out over decades!) and pleased with how the whole thing came together. The making of it in turn gave me some prompts for things to try with my Making Comics class this past term (and those I’ll share sometime soon). I was fortunate that Karen and I were in Angoulême at the same time, so I got to get some live references and posing for the piece while I was in the midst of it.