Binky: a fully automated social network that doesn't require you to be sociable 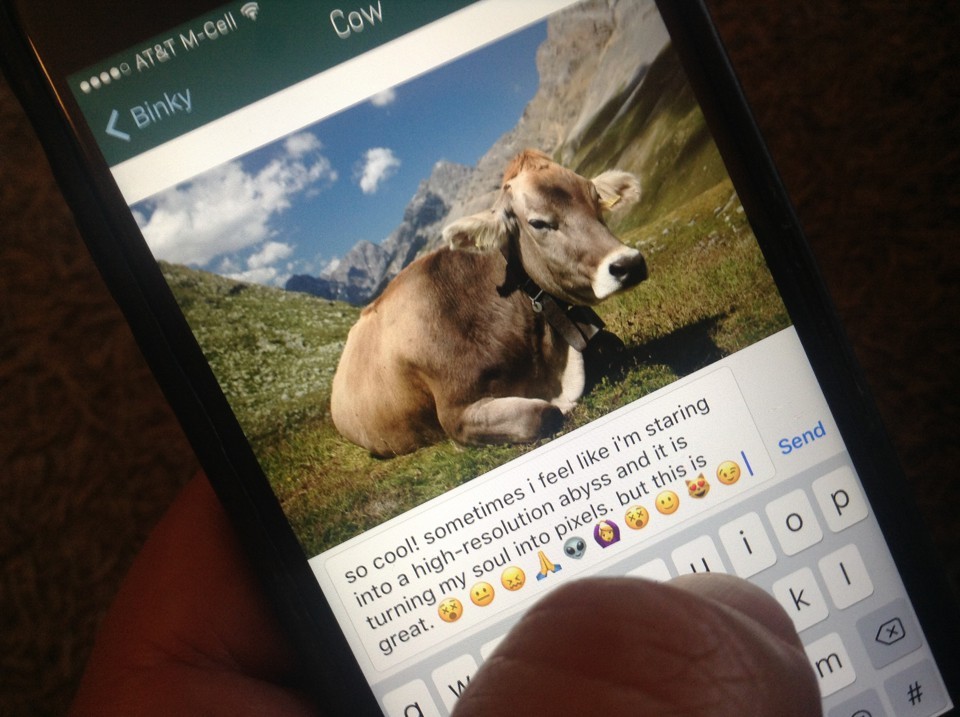 Have you ever wished you had a social media feed you could like, fave, signal boost and comment on without having to actually interact with people in any way? Binky has you covered.

The app scrapes the web for images that have descriptions and sends you a continuous stream of them as though they had been sent by imaginary people who might be your friends. You can like these, repost them, downrank or uprank them, but doing this has no effect (the data is thrown away), but it does satisfy any craving you have to interact with a social network while relieving any pressure you might feel as a result of having to please or be kind to other people.


You can also "comment" on the posts, but when you tap that button, the system generates its own automated words and emojis that appear, one at a time, while you mash an on-screen keyboard (it doesn't matter where on the keyboard you type). Words and emojis appear until you stop mashing the keyboard.

Ian Bogost -- the games theorist whose Cow Clicker did much the same for Zynga-style social games that Binky does for social media -- delves into how oddly satisfying Binky is to use. It's fitting that Bogost is writing about this here, because he was so caught off guard when his arch parody of Farmville turned out to be just as much fun to play as an actual Farmville game. Binky's creator Dan Kurtz (a "game developer and improv actor") is much less ambivalent about his creation, insisting that it's not a parody, just a kind of pure distillation.

“Is a baby pacifier just a parody?” Kurtz retorts when I press him on the matter. It’s a good point; something that replaces another isn’t always a joke. He reminds me of my own ironic app, which, to my delight, he cites as an inspiration: a game called Cow Clicker that boiled down Facebook games to their purest form like Binky does social apps. In both cases, irony offers an in-road for some but burns out fast. Deliberate use always wins.

On that front, Kurtz makes his faith in the app’s earnest utility clear. “Look, all we want from our apps is to see new stuff scroll up from the bottom of the screen,” the Binky website reads. “It doesn’t matter what the stuff is.” That’s no gag; it’s an incisive elucidation of why people want to handle their smartphones so often. By sparing the mental and emotional effort of taking in content and spitting back approval and commentary, Binky makes it possible to experience the smartphone as such, as a pure medium for its behavior rather than a delivery channel for social-media content.

That’s also where apps start, it turns out. Kurtz wanted to learn iOS programming, and he reasoned that the best approach would be to incorporate all the standard interface widgets. Binky was the result. What’s an app without content? Pure, unadulterated tapping and scrolling through the hollowed-out interfaces that all apps now share.

The App That Does Nothing
[Ian Bogost/The Atlantic]