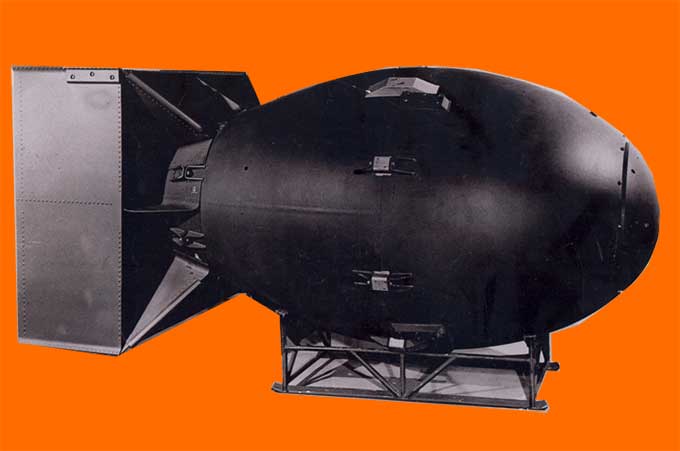 My twin brother and I grew up during World War II, and then in its long aftermath, when we lived with our military family in occupied Japan and Germany. WWII was the central pivot of the 20th Century. Before it, there were seven world powers; after, two.

I later was a postdoc working with renowned physicist Edward Teller, who told me many inside stories about the Manhattan Project that built the nuclear (“atomic”) bombs. My natural, science fictional instincts tinkered with the many what-if notions about how the war might have been different, and one became concrete in my mind: what if we’d gotten the bomb earlier?

New York Times bestselling author Gregory Benford creates an alternate history about the creation of the atomic bomb that explores what could have happened if the bomb was ready to be used by June 6, 1944. Buy it on Amazon

Teller thought it could have, and so did my father in law, Karl P. Cohen, who worked in the early nuclear days and the Manhattan Project.

Everybody loves success, so historians have papered over the fact that when we developed the atomic bomb we made a decisive bad judgment that cost over half a billion dollars of 1940s dollars and delayed the war’s end by about a year.

The bad decision came in 1942 from General Leslie Groves, who directed the Manhattan Project, which was the U.S. R&D program to develop the first nuclear weapons. To make uranium suitable for an atomic bomb, you must enrich it up to weapons-grade, so that it is almost pure U-235, the element’s most fissile isotope. Groves chose to pursue gaseous diffusion over an alternate concept—Karl Cohen and Nobel Prize in Chemistry winner Harold Urey’s centrifugal separation—to enrich uranium up to weapons-grade.

We now know that was a huge mistake. Karl and Harold Urey said so then.

If we had stuck with centrifugal separation for another six months we would’ve solved its engineering problems, without question. Gaseous diffusion did not have the necessary semi permeable membranes when Groves decided to use it, and it took two more years—until 1944—to develop them. Nobody uses diffusion to separate isotopes now; too expensive and slow. But the politics of the time weighted Groves decision.

The crucial turning points in my alternative history are the events early in the Manhattan Project, when the Urey group at Columbia could not get funding for centrifuge development. We forget the style of science in that era, when government did little research and corporations gave small sums for specific developments. All such work focused on acquiring technologies useful in the short term.

Big Science came into being for the first time in the Manhattan Project’s large laboratories and intricate coordination, invented chiefly by Groves, Oppenheimer, Fermi and Lawrence. Karl Cohen once remarked to me that in 1939 he and Urey estimated that to develop fast centrifuges might take as much as $100,000 – “so then we knew it was impossible!” At that time Karl was earning less than $2,000 a year.

Suppose we do the Manhattan Project job right, first time.

So how to use a bomb? There would be a fresh one every month or two, at best, so what’s the first target?

In the novel, everybody thinks Berlin is the obvious target. I asked military types and they said no, you must leave in place the civilian authority that can surrender. This is standard doctrine. But in 1944?

We now know that the Prussian wing of the German Army’s General Staff tried to negotiate through the British for at least a cease-fire, from 1943 onward. They tried to kill Hitler and nearly did in July 1944. The commanding generals were all on battlefields in 1944, not Berlin--where the Nazi Party types, whom the Prussians hated, were dug in.

So… What to do with these elements?

I researched many off-trail threads that really happened, but we forget:

That both sides thought of using radioactive uranium as a pollutant, akin to poison gas and worked out details.

That Eisenhower sent teams with Geiger counters to measure such use at Normandy.

That we so feared a German nuclear program, the General commanding the Manhattan Project, Leslie Groves, sent in his top agent to assassinate Heisenberg if the agent thought Heisenberg’s team was getting close to a bomb.

Blend these and many existing letters and memos, my memories from knowing most of the characters in the novel--season to taste, heat, stir.

One essential element in the novel is how well I knew the characters. I worked with them as a young physicist, when they were the wise men of the field. These choices fill out the novel. That gave me insights to go beyond the stacks-of-facts approach historians and alternative history writers suffer under: I knew how they spoke, acted, joked.

First, the Soviets don’t get to reign over Eastern Europe, because they’re kept out of the lands they occupied in 1944-45.

Second, we see what use “tactical” (less than a megaton) weapons have.

Third, ten million more people survive the war. Plus other benefits, which come to life in a long coda to the novel, fiction set in 1963.

To write that part, I summoned up my own memories of the postwar era. There was much terror and thought about the introduction of the H-bomb and the arms race following.

Many thought the world could not survive such forces for long. Such views had accelerated after the grave gray giants of the world, such as Bertrand Russell and even Einstein himself. They made clear predictions in the mid-1950s. They felt that hydrogen bomb war between the USA and USSR was inevitable unless some higher body held all such weapons: the United Nations. Russell had even predicted that the death of civilization under a myriad of the H-bomb’s crimson blisters was inevitable and would happen before 1960.

Can you imagine how the United Nations, holding all the weaponry, could make sure no one else got them? I can’t, and I’m a science fiction writer.

How do the novel’s ideas play out, giving us a different post-WWII world?

I wrote The Berlin Project to see how we might have had a better world than the one we’re in.

Gregory Benford is a physicist, educator, and author. He received a BS from the University of Oklahoma and a PhD from the University of California, San Diego. Benford is a professor of physics at the University of California, Irvine, where he has been a faculty member since 1971. He is a Woodrow Wilson Fellow and a Visiting Fellow at Cambridge University. He has served as an advisor to the Department of Energy, NASA, and the White House Council on Space Policy. He is the author of over twenty novels, including In the Ocean of the Night, The Heart of the Comet (with David Brin), Foundation's Fear, Bowl of Heaven (with Larry Niven), Timescape, and The Berlin Project. A two-time winner of the Nebula Award, Benford has also won the John W. Campbell Award, the British Science Fiction Award (BSFA), the Australian Ditmar Award, and the 1990 United Nations Medal in Literature. In 1995 he received the Lord Foundation Award for contributions to science and the public comprehension of it. He has served as scientific consultant to the NHK Network and for Star Trek: The Next Generation.

This video imagines Dropbox in the 1980s

The geniuses at Squirrel Monkey designed Dropbox for the 1980s. It’s a perfect solution for the MS-DOS, floppy disk, and modem era. Image: YouTube

The geniuses at Squirrel Monkey are back with another trip down alternate memory lane. This time, they imagine what the online game platform Steam would be like back in the days of modems and floppy disks. Their videos are a great reminder of what it was like to use computers in the 1980s.