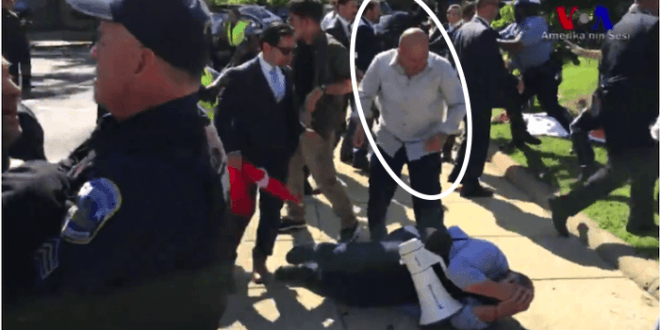 Remember when the President of Turkey came to Washington to visit Trump, and his goons beat the crap out of American protesters on American soil? The DC-based Turkish news site Washington Hatti reported today that Eyup Yildirim was arrested for playing a role in this incident, and the Daily Caller now reports that a second, Sinan Narin, was also arrested. Both men beat peaceful protesters outside of the embassy of Turkey.

U.S. Marshals have arrested two Turkish men living in U.S. for their role in beating peaceful protesters outside of the Turkish embassy in Washington, D.C. last month, a source with knowledge of the matter tells The Daily Caller.

The State Department confirmed in a statement to TheDC that arrests have been, and the Washington, D.C. Metro police department identified the two men as Eyup Yildirim and Sinan Narin.

“Now that charges have been filed, the Department will weigh additional actions for the named individuals, as appropriate under relevant laws and regulations. Any further steps will be responsive and proportional to the charges,” a State Department official said.