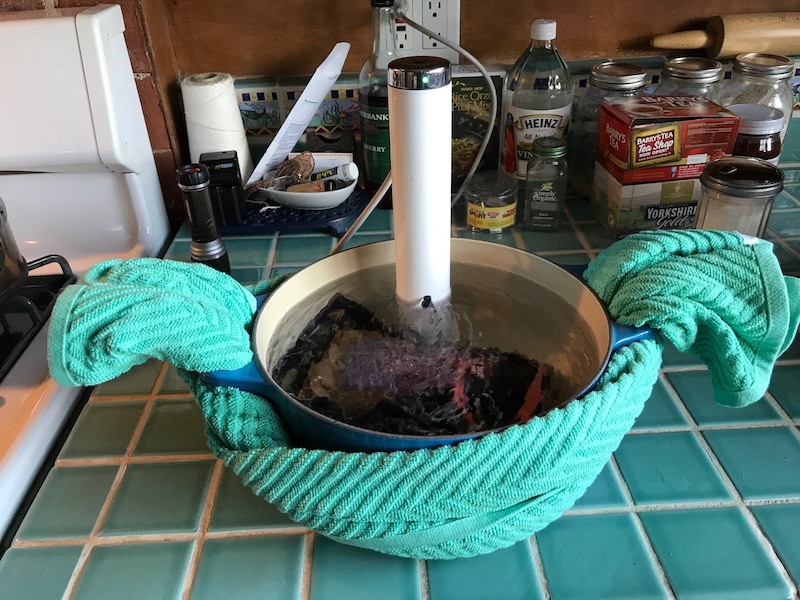 Next to my trusted Wagner #9 skillet no other single kitchen tool gets as much use as my ChefSteps Joule. Not even my chef's knife.

I love sous vide cooking for its scientific perfection. I get exactly what I wanted, exactly how I wanted it from everything I cook. Immersing my food items in a bath of precisely heated water allows for exactly the right amount of done-ness, and just the right changes to flavors and texture to make a dish perfect. ChefSteps Joule is a sous vide circulator that makes it possible to use this cooking technique daily.

Joule is small, has the most versatile system for affixing itself to a container I've seen: a magnet. Joule also needs less water than other models I've tried, and is thus fantastic for a single dad preparing food for one and a half folks. During the Great Drought I felt horrible about using 3-4 gallons of water to sous vide some steaks or a tri-tip, now I can get it done in 1 1/2 gallons or so in a French oven.

Joule is managed via an iPhone or Android app. It connects via both bluetooth and wifi, and has no read-out, dials or controls beyond a button for turning it on or off. The Joule app also has a wonderful library of ChefSteps recipes and guides for cooking with the unit, but is simple to just override and use however you want.

The new Joule comes with a white button, and white magentic base, instead of the stainless steel of the OG model. Both Joules operate identically, the use of a less expensive material allows the ChefSteps folks to pass the savings on to you.

I used to make fun of a friend for floating his dinner in a pool of warm water, now it is one of my most trusted cooking techniques.

ChefSteps Joule sous vide eliminates all the niggling inconveniences of other models and turns sous vide into a really useful, everyday technique. I’ve been cooking with it for months now, and I’m in love. Sous vide cooking is a method of bringing the foodstuffs you want to eat up to their cooked temperature in a […]