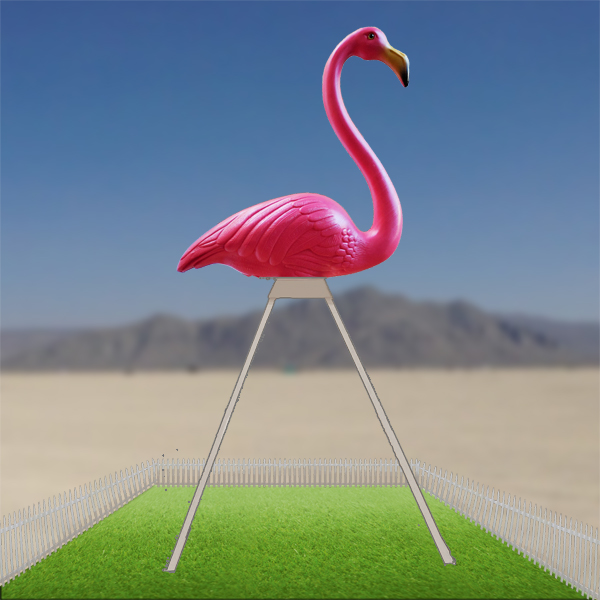 At last week's Burning Man Desert Arts Preview in San Francisco, I learned that artist Josh Zubkoff and his crew are bringing an enormous piece of hot pink pop kitsch to the playa this summer. Twenty times the size of a store-bought pink flamingo lawn ornament, his Phoenicopterus Rex will stand over Black Rock City at 40-feet tall!

Brigid Hughes, a witty cohort of the artist, described the installation to the event's audience. She said that Zubkoff designed the massive pink flamingo with four legs. instead of the traditional two, to give it additional stability. She quipped, "It's evolved!" (To get an feel for how huge this thing really is, 750 lbs. of steel are used per leg.)

Hughes said the installation will have a ladder so Black Rock citizens can go inside, and on top of, the iconic bird because, "Who doesn't want to ride a pink flamingo?"

The piece will be complete with a white picket fence and a fake green grass lawn (a repurposed high school football field).

Hughes closed out the presentation with, "If the playa is our home, then let us decorate the lawn," and, a beat later, "Shipping it is gonna be a thing."