An impressive collection of circuit diagrams for Arduino electronics 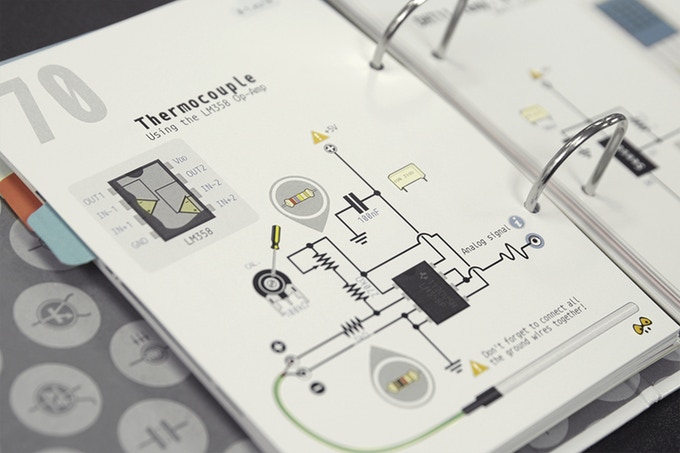 "Oh my god, this is beautiful!," "What IS this?; this is SO cool!" It's not often you get such reactions (especially from non-techies) for a nerdy computer hardware and electronics book filled with esoteric-looking diagrams. But that's what happened when Alberto Piganti sent me a prototype copy of his ABC: Basic Connections book and I left it out on my dining room table. Alberto sent the copy because he's currently crowdfunding the book on Kickstarter (now with only 14 hours left to go!). UPDATE: The book is now available to pre-order on Indiegogo

Anyone who knows Alberto's work on his website PighiXXX knows that he creates gorgeous, free to download, and easy-to-understand circuit diagrams, pinouts, and other electronic schematics for the Arduino user community. His work is laudable for being exceptionally clean and clear, easy for non-techies to understand, and rendered in the most human-readable ways possible. And it's all just too dang purdy!

His ABC: Basic Connections book is a small 2-ring binder collecting (and adding to) the best and most useful schematics from the site. The idea is that the schematics are printed on sturdy pages that you can remove from the binder to use on your workbench (and updates will be available). He describes the impetus for the project:

Back in 2013 I began designing my own and making them available for free on my website pighixxx.com. I have created so far more than 300 high quality circuit diagrams and pinouts that are used by more than 500,000 makers worldwide. The feedback from the community has been amazing and it has encouraged me to create more and more content. The only problem is that they're not very convenient to use on your computer screen where the programming environment should be the main open window. Also, printing the diagrams can only add more clutter to your desk.

The book is a collection of neat, easy-to-read circuit diagrams and pinouts that will show you how to properly connect almost anything to your Arduino, ARM mbed or ESP8266 compatible boards. ABC: Basic Connections is great for both beginners and professionals and it can be used as a resource for teaching electronics.

I cannot recommend this book highly enough. Every person who frequently used Arduino-controlled electronics in projects, regardless of your skill level, should check this book out. It has circuit diagrams for nearly every major hardware connection you might want to make to an Arduino and it also includes pinouts, a reference section for color-coded components (e.g. resistors), and a very well-described crash course in electronic components. Alberto crowdfunded (and delivered) a similar book in 2013. This book contains twice as much content as that edition. For the Kickstarter campaign, he's selling the book for US$25. After that, it will retail for around $39.

Surprisingly funky 1981 Muzak version of "Funkytown," along with reggae, folk, and metal versions

This surprisingly funky Muzak version of “Funkytown” (1979) by Lipps Inc. turned up on r/ObscureMedia. Steven Greenberg wrote the original while living in Minneapolis with aspirations of moving to New York City, a scene that would “keep me movin’, keep me groovin’ with some energy.” Following the Reddit posting, a commenter alerted us that in […]

GNS Foods of Arlington, TX supplies nuts to airlines. Now that Airline traffic has taken a nosedive, the company is stuck with 42 access tons of cashews, pistachios, pecans, and almonds. They’ve taken to selling them at their retail store for $6 a 1.25 lb bag, “selling for less than they cost GNS wholesale, even […]