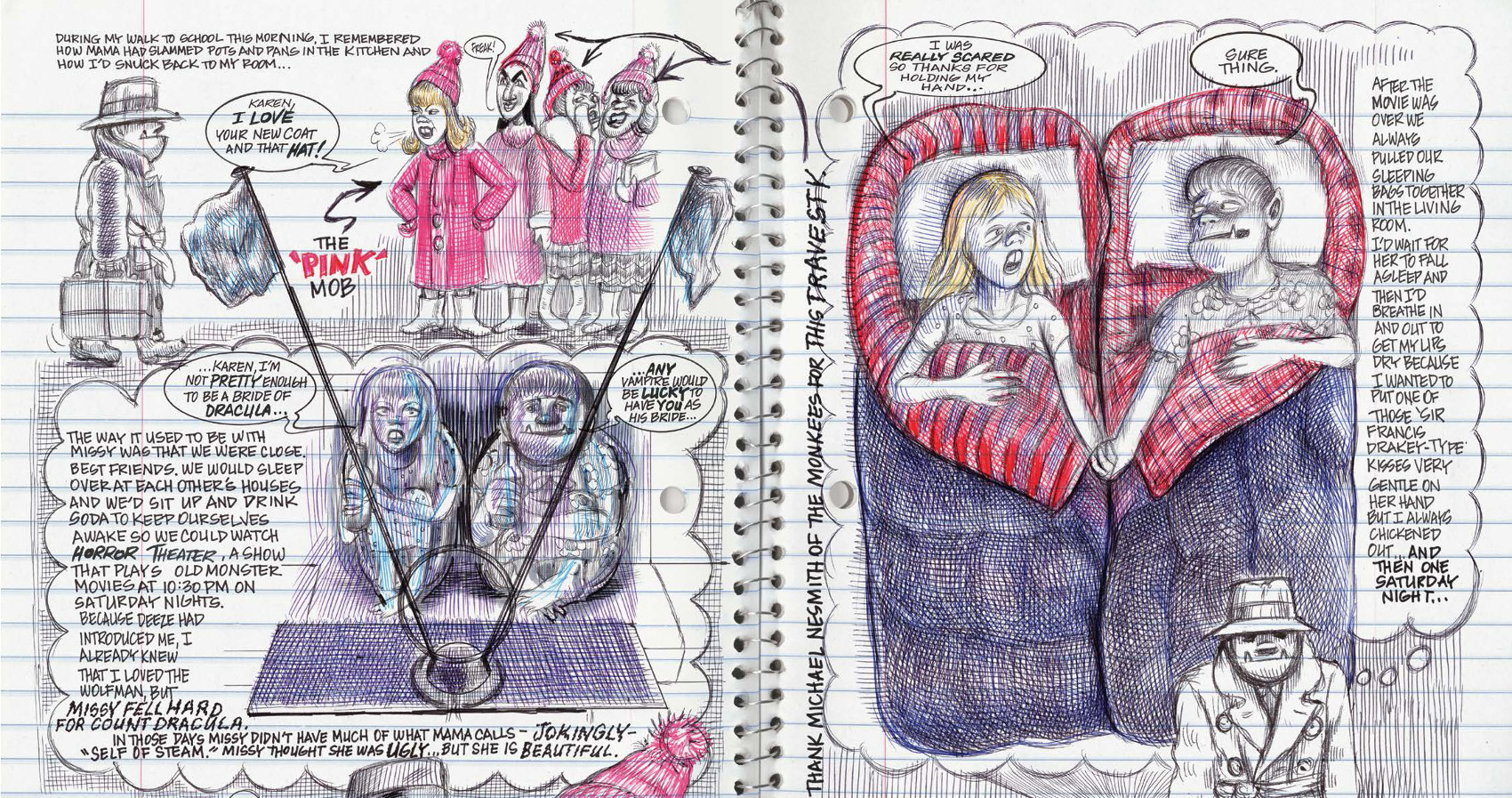 Emil Ferris's graphic novel debut My Favorite Thing is Monsters may just be the best graphic novel of 2017, and is certainly the best debut I've read in the genre, and it virtually defies summarizing: Karen is a young girl in a rough Chicago neighborhood is obsessed with monsters and synthesia, is outcast among her friends, is queer, is torn apart by the assassination of Martin Luther King, by her mother's terminal illness, by the murder of the upstairs neighbor, a beautiful and broken Holocaust survivor, by her love for her Vietnam-draft-eligible brother and her love of fine art.

No less genre-busting is the author: Ferris started work on Monsters when she was a 40-year-old single mom, partially paralyzed by West Nile virus: no longer able to work as an illustrator, she taught herself to draw again by creating the first volume of Monsters over six long years.

Monsters is in firmly the genre of girls' crisis memoir -- among such titles as The Diary of Anne Frank, Butler's Parable of the Sower, Womack's Sensless Acts of Random Violence -- but it is also about six kinds of love note, to different obsessions and diversions.

So on the one hand, Karen narrates a gruesome and sorrowful life in poverty-wracked Chicago, where Puerto Ricans, displaced southern African Americans, and recession haunted "hillbillies" live in crowded and violent conditions, where a young girl's innocence is impossible to maintain, between public liaisons between sex-workers and johns, street harassment and violence, organized crime and grinding poverty.

On the other hand, it's a tribute to -- and critique of -- the classic monster comics and magazines of the era, which Karen is obsessed with, and through whose visual styles her story is told. It's a tribute to fine art and the pieces hanging in the galleries and museums of Chicago where Karen and her mysterious, womanizing, tattooed older brother Deeze brings her. It's a complicated story about friendship among girls, about gender identity and queerness, about family.


It embeds the Holocaust narrative of the dead upstairs neighbor, a Jew who escaped concentration camps through sex work and complicity, and whose murder is the Macguffin on which the story turns.

It's a page turner from start to finish, and visually unlike anything else I've ever seen. The emotional and visual palettes are dense and intense, and smart and subtle. Everything about this is amazing, except that it ends on a cliffhanger and part two won't be here until next March.

Every company needs to have a firm grasp on their bottom line. But while every company used to have their official ledger books or one of those old-school physical world accountings of a company’s every asset and expenditure, many firms don’t work that way anymore. Oh, they all still balance their “books” (if they want […]

Are you ready to write and publish your own book? It’s not as crazy as it sounds...

For all its downsides, you have to admit all this extra time spent at home has to have boosted your creativity. More time to sit and think means more time to develop new original ideas. Trust us, you wouldn’t be the first to find that a global emergency has fueled the need to start a […]