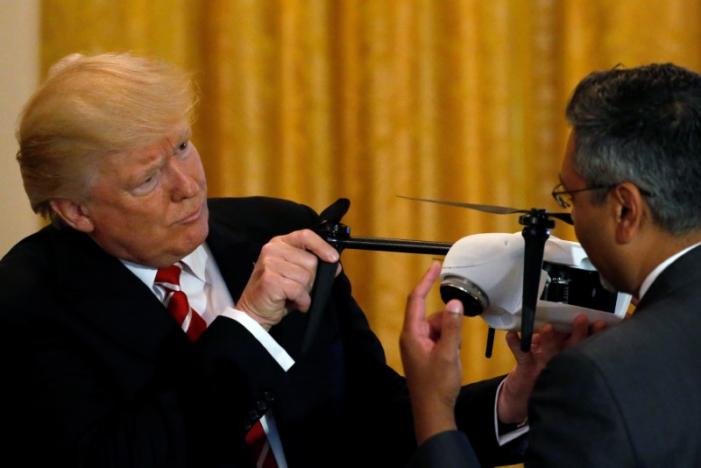 President Donald Trump today “offered support for emerging technologies including unmanned aerial vehicles and next-generation wireless networks in a meeting on Thursday with the chiefs of AT&T Inc and General Electric Co and other business leaders,” reports Reuters.

At the White House today, Trump met with venture capitalists, and with telcom and drone executives, and they talked about how the federal government can speed technologies to market.

The meeting, which lasted more than three hours including breakout sessions, is part of Trump's effort to tap industry experts on how to boost U.S. competitiveness in various fields and create jobs.
On Monday, Trump met with the heads of 18 U.S. technology companies including Apple Inc, Amazon.com Inc and Microsoft Corp, seeking their help to make the government's computing systems more efficient.

He will meet with energy industry leaders next week.

"We want them to create new companies and lots of jobs," Trump told the executives on Thursday. "We're going to give you the competitive advantage that you need."

Drone makers argued that the administration should move faster to approve broader commercial use of drones and noted that the Transportation Department does not require automakers to win pre-approval of self-driving vehicle technologies.

Obama administration rules opened the skies to low-level small drones for education, research and routine commercial use. The Trump administration is considering whether to expand drone use for deliveries beyond the view of an operator. Security issues would need to be addressed.

And in the department of interesting timing:

The United States is expected to approve India's purchase of a naval variant of the Predator drone, a source familiar with the situation said, as Prime Minister Narendra Modi tries to revitalize relations with Washington when he meets President Donald Trump for the first time.

Securing agreement on the purchase of 22 unarmed drones is seen in New Delhi as a key test of defense ties that flourished under former President Barack Obama but have drifted under Trump, who has courted Asian rival China as he seeks Beijing's help to contain North Korea's nuclear program.

The deal would still require approval by Congress. California-based General Atomics, the maker of the Guardian drone sought by India, declined to comment.