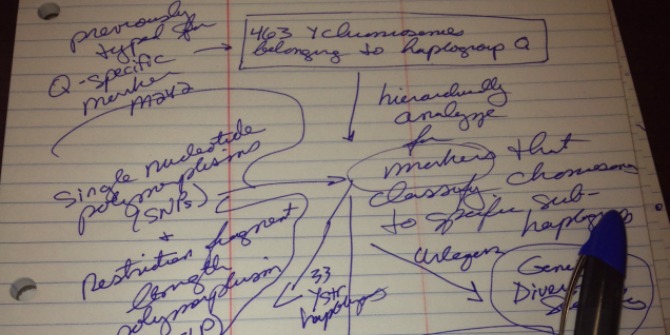 Jennifer Raff -- a bioanthropologist and geneticist who researches and teaches at U Kansas and U Texas -- provides some excellent advice and context on how to read a scientific paper, from figuring out which papers and journals are worthy of your attention to understanding the paper in its wider context in the relevant field.

Raff advises skipping the abstract and going straight to the introduction, taking careful notes to understand the question the paper seeks to answer, digging into the experimental methodology, then looking at the response from other researchers in the field.

I want to help people become more scientifically literate, so I wrote this guide for how a layperson can approach reading and understanding a scientific research paper. It’s appropriate for someone who has no background whatsoever in science or medicine, and based on the assumption that he or she is doing this for the purpose of getting a basic understanding of a paper and deciding whether or not it’s a reputable study.

The type of scientific paper I’m discussing here is referred to as a primary research article. It’s a peer-reviewed report of new research on a specific question (or questions). Another useful type of publication is a review article. Review articles are also peer-reviewed, and don’t present new information, but summarize multiple primary research articles, to give a sense of the consensus, debates, and unanswered questions within a field. (I’m not going to say much more about them here, but be cautious about which review articles you read. Remember that they are only a snapshot of the research at the time they are published. A review article on, say, genome-wide association studies from 2001 is not going to be very informative in 2013. So much research has been done in the intervening years that the field has changed considerably).

How to read and understand a scientific paper: a guide for non-scientists