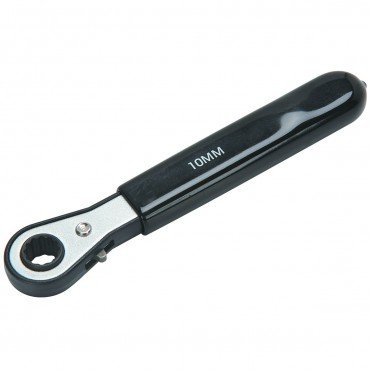 My cars and bikes have the batteries in hard to reach places. This 10mm battery terminal rachet helps out!

In prepping the Vanagon Westy for a long roadtrip, I found I've killed my house battery. I ordered up a replacement but dreaded getting into the battery box. In a Vanagon, Volkswagen hides the batteries underneath the passenger and drivers seats. Getting at these battery terminals is a comedy of errors and blood. I'd go so far as to say the blood was compulsatory until I got this handy rachet at Harbor Freight.

It is small. It fits where I need it to. It is a rachet, and as such I am not constantly trying to re-seat the fucker while zapping myself against a grounded battery box in a thoughtlessly engineered tight space. At least VW put a cover on the battery box, albiet a conductive metal one. My '78 Audi 5000, the model with occasional self-determination, had a passenger bench burnt with splashed battery acid from another VW/Audi underseat battery adventure.