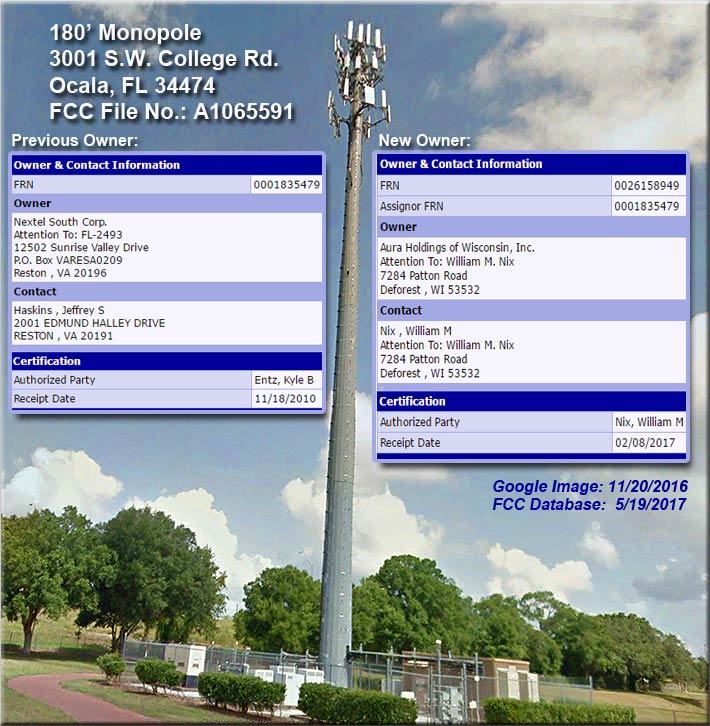 With just a few keystrokes, you could be the proud owner of a few dozen wireless towers, thanks to a flaw in the FCC's Antenna Structure Registration (ASR) database. Aura Holdings of Wisconsin, Inc. is now being investigated for changing registrations for 40 towers without authorization.

Changing ASR ownership is an easy process by applying online for an FCC Registration Number (FRN) which is instantly granted whether the factual or inaccurate information is provided. Then, once logged in, an FRN holder can submit a form stating that they are the new owner of any or multiple structures in the database.

As soon as it is submitted, the change is immediately reflected in the ASR.

Although this Florida tower was not one that Aura Holdings of Wisconsin illegally took ownership of, there was an ownership change submitted on April 20, according to its history log, but it doesn’t appear that a Change of Ownership Letter was sent. When the broadcast tower was sold in 2004, a letter was sent to the assignor. Although Grace said that owners are notified if a change is made in the system, two tower owners whose structures’ ownership was changed by Nix informed Wireless Estimator they were never informed with an email or through regular mail, or they would have immediately acted.