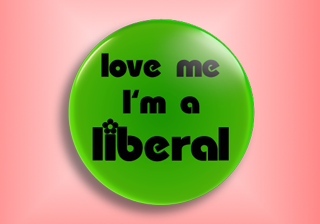 On my first day at Michigan State University in 1992, a fellow student called me a "liberal" and I was shocked: as a Canadian who was often to the left of the social-democratic New Democratic Party, I identified "liberal" with the Liberal Party, a centre-right political party that had once imposed martial law in Canada.

As I lived in the USA off and on in the ensuing decades, I grew increasingly frustrated with the truncated US political spectrum, whose mainstream ran from far-right to center-right, with "liberal" being as far left as anyone dared to go. It's this bizarre situation that created an equivalence between Bernie Sanders and Jeremy Corbyn, though Corbyn is far, far to the left of Sanders.

These left-wing activists reject and deplore the term "liberal," seeing it as "weak-minded, market-friendly centrist, wonky and technocratic and condescending to the working class."

Over the last few years, though — and especially 2016 — there has been a surge of the opposite phenomenon: Now the political left is expressing its hatred of liberals, too. For the committed leftist, the ‘‘liberal’’ is a weak-minded, market-friendly centrist, wonky and technocratic and condescending to the working class. The liberal is pious about diversity but ready to abandon any belief at the slightest drop in poll numbers — a person who is, as the folk singer Phil Ochs once said, ‘‘10 degrees to the left of center in good times, 10 degrees to the right of center if it affects them personally.’’ The anonymous Twitter account ‘‘liberalism.txt’’ is a relentless stream of images and retweets that supposedly illustrate this liberal vacuousness: say, the chief executive of Patagonia’s being hailed as a leader of ‘‘corporate resistance to Trump,’’ or Chelsea Clinton’s accusing Steve Bannon of ‘‘fat shaming’’ Sean Spicer.

This shift in terminology can be confusing, both politically and generationally — as when baby boomers describe fervent supporters of Bernie Sanders as ‘‘very liberal,’’ unaware that young Sanders­istas might find this vomit-inducing. It can also create common ground. Last year, the young (and left-leaning) writer Emmett Rensin published a widely read piece on Vox deriding liberals for their ‘‘smug style’’; soon enough, one longtime adept of the right, National Review’s Ramesh Ponnuru, was expressing his partial approval, writing in Bloomberg View that what contemporary liberalism lacked most was humility. Here was a perspective common to both sides of the old spectrum: that liberals suffered from a serene, self-ratifying belief in their own reasonableness, and that it would spell their inevitable defeat.

Hated by the Right. Mocked by the Left. Who Wants to Be ‘Liberal’ Anymore?
[Nikil Saval/New York Times]