Around the world, public perception of China's political primacy surges 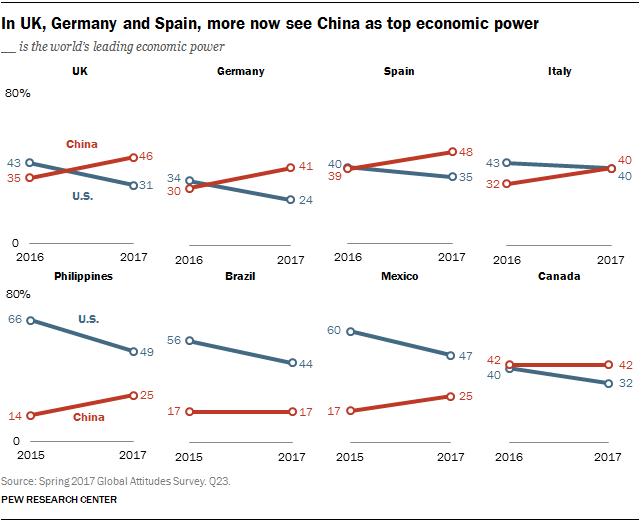 The US is still viewed around the world as the top political power, but perceptions of China's leadership are growing rapidly, especially in African states with heavy Chinese investment, and in Russia.

A Pew poll in 38 nations shows that, around the world, the leaders of both China and the USA are viewed with strong disfavor (Putin is also strongly disliked; Merkel enjoys high ratings, having outsourced her human rights abuses to Greece). The US is viewed as more politically free and respecting of human rights than China. Generally, young adults view China as more powerful than their older counterparts.


In Asia/Pacific, the views on China are polarizing -- Vietnam, Indonesia and South Korea are all hemorrhaging confidence in China, while Australians are more bullish on China than ever.

The view of the Chinese government as a violator of civil liberties does not hold across all regions, however. More than half in the Middle East (55%) and sub-Saharan Africa (53%) say that China does respect the personal freedoms of its people, a stark difference from the views of those in the West.

China’s reputation for defending the rights of its citizens is particularly strong in sub-Saharan Africa. In all but South Africa, half or more say that Beijing respects the personal freedoms of its people. And in South Africa, a plurality (46%) agrees.

Within its own region, assessments of China’s record vary. A majority of Indonesians (56%) and roughly half in the Philippines (52%) say that China respects the personal freedoms of its people. Meanwhile, Japanese (85%), Australians (81%) and South Koreans (77%) are as negative as publics in Europe and North America in views of the Chinese government’s protection of individual rights.

While views on this question have remained relatively consistent across most countries, opinions in the Philippines, Jordan and Russia have shifted in recent years. Views of China as a protector of personal freedoms have risen among Filipinos since 2014. In addition, for the first time since the question was initially asked in 2008, majorities in Russia (56%) and Jordan (55%), where Xi has made efforts to improve bilateral relations, say that the Chinese government respects the personal freedoms of its people.