Only Mexico City has the cojones for the Trump/They Live Billboard! 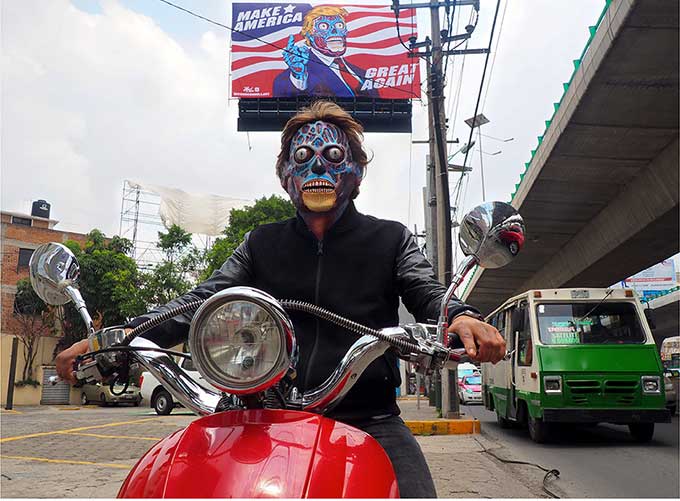 A few months ago my artist pal Mitch O'Connell launched a crowdfunded plan to pay tribute to the cult classic movie They Live, about a race of space creatures who secretly take over Earth by brainwashing people into supporting policies that are bad for them. He got enough money to erect a billboard in Mexico City!

Way back in August of 2015 I was starting to sketch out a poster design to advertise a 24 hour horror movie marathon. The headlining feature was a screening of They Live, starring Rowdy Roddy Piper and directed by John Carpenter. It's a masterful cult movie of gruesome aliens planning to take over Earth walking among us disguised as humans. But luckily our heroes, by looking through special glasses, can see the bad guy's true otherworldly skeletal features and when they run out of bubblegum, kick some ET ass.

As I was penciling away, Trump was on the TV talking about something or other a couple months into his candidacy.

I’ve enjoyed watching The Donald since the days of Celebrity Apprentice. He was a very amusing blowhard parading around in his gold on gold hotel rooms, and now mesmerizing in his run doing the opposite of any other candidate. I looked back at my drawing, then back at Trump, and started thinking how funny it would be to give that alien Trump's equally mesmerizing swoop of hair. It was a very natural fit!

At the time, I thought I was the first person on the planet to do a They Live parody, but of course later on I discovered that other creative folks had the same brainstorm before me with Reagan, Obama and others as the alien, and after my doodle made the rounds, it seemed everyone and his brother was doing the Trump/They Live mash-up. In fact, my two versions of the art became the most popular things I’ve ever drawn. Every day, Amazon would have at least a dozen sellers with bootleg items from tees to backpacks. It was the choice of many tattoos and also painted as stenciled graffiti. I was seeing it on protest signs in marches and all over the internet. It even made the cover of the UK news magazine, The Big Issue. On election day, assuming Hilary’s win, I thought that would be the end of my drawing's journey. But surprise, surprise, it was a "Good News, Bad News" kinda night. The good news? The art would still be kept alive! With a Trump presidency, things just keep getting stranger (and the bar was set pretty high for strange to begin with), and the world of They Live becomes even more prophetic. Of course, this isn’t all Trump's fault. No matter what your point of view, most folks feel Washington is a big mess of nonfunctioning nonsense, but since Trump has the best hair, he also wins getting the caricature on the billboard. :-)

The first billboard company, ClearChannel, was good to go. I had it all planned out with them before I started the crowdfunding. They had seen the "Make America Great Again/They Live" art and didn’t voice any objections. When I was ready to give them the money to actually install the Washington billboard they got cold feet and changed their minds. Outfront Media was the next company that respond to my inquiries. Again, I showed them the art first. They explained the no way in hell was this going to fly in Washington, so I went with a Chicago billboard that was around 25' x 30' for $2800. I redesigned the art to fit but just as I finished they also emailed with second thoughts and backed out. I went to Interstate Outdoor Advertising and sent them the art. Again, no problem. What I could get for our $3000 was a 14' x 48' billboard outside of Chicago on I-55. I again redrew the art to fit, signed the contracts and sent them my payment information. Then they came to their senses and said no-go. I went back to JCDecaux, a company I had sounded out earlier that only offered those 5' high panels on the side of bus stops in Chicago. At this point, I’m open to most anything. For $3000 I could have one on Michigan Ave for a month, but a day later this was waiting in my inbox “I’m afraid that since this is political in nature, especially with the bad press Kathy Griffin gave recently, the City will turn down your ad copy” was their thanks-but-no-thanks response.

I think I contacted over thirty billboard companies, some that had thousands of ones for rent, and many that had only a few regional offerings. Most didn’t even respond to multiple inquiries. The ones that did, started to realize that this is a President that, in all likelihood, will make it a personal vendetta to destroy whatever company dares mock him. Others were more upfront with their reasoning, "Thanks for your e-mail. I will discuss your artwork and idea with the owner of our company on Monday. However, I need to let you know that we are all huge Trump supporters and we would not post anything on our billboards that would appear to disparage the President in any way. Love Donald Trump!!!!”

Yes, I don’t think much of Donald Trump, but I soft-selled this as much as humanly possible when making the pitch to anyone I could find, but it was a no-go TO EVERY SINGLE BILLBOARD COMPANY IN THE UNITED STATES! I thought that was the end of it. But then, cue music, the brave folks across the border, the upstanding heroic citizens of Mexico that Trump based his campaign on objectifying as rapists and criminals, had the cojones to give Trump the FU.

God Bless Mexico, the only country left that has the freedom to display the "Trump/They Live Billboard!"

Either put on these glasses or start eating that trashcan / trump