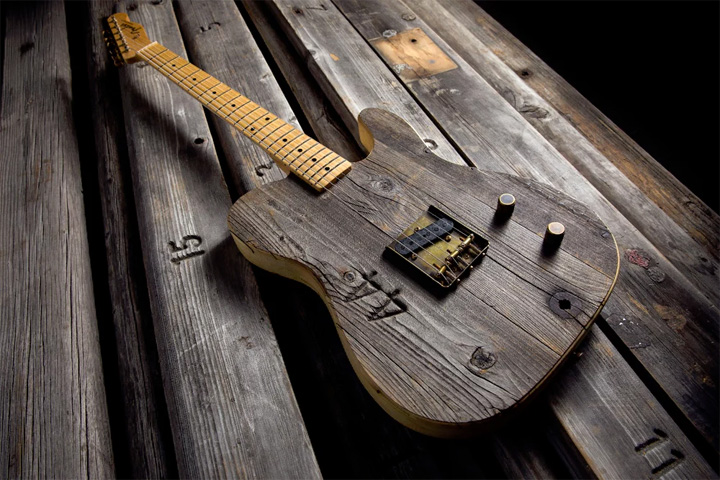 $12k for a guitar made of the boards where people sat and listened to historic concerts.

What kind of pick-up does this fantastically expensive beauty come with? Best I can tell: Black. I hope it sounds really, really good.

Since its official opening in the summer of 1922, the Hollywood Bowl has spent almost 100 years hosting some of the biggest acts of every decade. Louis Armstrong, the Beatles, the Rolling Stones, the Grateful Dead, the Beach Boys, and Black Sabbath are just a smattering of the talent that has graced the Bowl's stage, and now, you can own a functional piece of its history.

Shishkov maintained the characteristics of each piece of bench board that he used, with all of its original scratches, cracks, and bolt holes. The top of each guitar will also feature the original seat number.

Willie Nelson’s Martin N-20 guitar, affectionately known as Trigger, has seen some shit. Happily, the majority of the shit it’s seen has been in the name of making countless music lovers, the world over, happy. Over the years, Willie’s finger-pickin’ playing style has worn second soundhole into the guitar (not to mention the other carnage […]

I don’t know why this exists, but I’m glad it does. I just want to know how it sounds, and how it plays! I guess I’ll have to visit Cranmer Guitars the next time I’m in Glasgow.