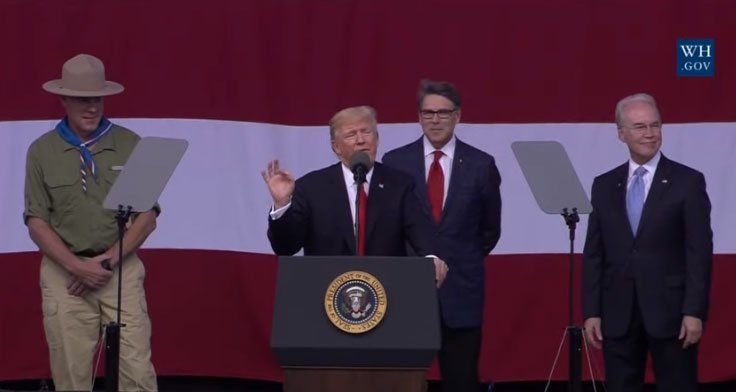 Trump relitigated the 2016 election, boasted about his inauguration crowds, and told other inappropriate fabulisms to a crowd of children at the 2017 Boy Scout Jamboree today, because nothing matters anymore.

"The hottest people in New York were at this party. A lot of successful people were there. And I was invited to the party,
I was very young…"

As you watch, and read the transcript, remember. The audience is primarily children. Could have been me mis-hearing, but I could swear he mis-speaks, "their road to American sex."

HE SAID THIS TO BOY SCOUTS pic.twitter.com/SkiBUC8CRY

POTUS spoke as if he was in front of a rally crowd, as oppose to 12 to 18 year old Scouts.

Trump tells 40,000 Boy Scouts: "We could really use some more loyalty, I will tell you that." pic.twitter.com/7gQ04lsdU5

The Boy Scouts of America are now booing Hillary Clinton as President Trump recounts his Michigan strategy and the election results.

"you know how the 80s were, the yayo was fire, the lines were fatter. Got ur whole face froze" – pres trump to the boy scouts (allegedly)

has he led them in the singing the Horst Wessel song yet? https://t.co/NEpoD7QGPV

Trump tells kids at Boy Scout Jamboree about his friend who got tired of yachting, lost his $$ & a NY cocktail party https://t.co/VbNRcRVpgB

Trump is currently relitigating the 2016 election — talking Michigan, Wisconsin — before a crowd of Boy Scouts

President Trump to the Boy Scouts: "Under a Trump Administration, you'll be saying 'Merry Christmas' again as you go shopping."

Worst Boy Scout Jamboree since 1973 when Nixon went on rant about Jews in the media.

Trump is trying to turn the Boy Scouts into Trump Youth. https://t.co/zeooF8Mue9

"These dishonest people," President Trump calls the media while recounting his electoral college victory to kids at the Boy Scouts Jamboree

Trump taunts his predecessor while addressing thousands of kids at the Boy Scouts Jamboree: "Did President Obama ever come to a jamboree?"

Everything is culture war. Everything. https://t.co/r7oxht050i