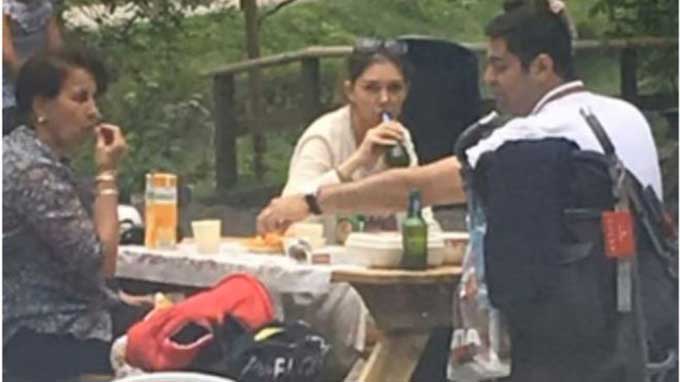 Conservative Iranian state television presenter Azadeh Namdari makes a big deal about how important it is for women to obey an Islamic dress code. But someone took a video of her drinking a bottle of beer and not wearing a hijab while she was on vacation in Switzerland. When the video was made public, Namdari said the video was taken immediately after her scarf fell off. She didn't explain how the bottle of beer ended up in her hand. I reckon a squirrel in the tree overhead dropped it she accidentally caught it. Then she took a sip to find out what it was. Since alcoholic drinks are forbidden in Islam, she definitely spit it out.

The Facebook page Iran Without Clerics addressed Namdari in a post and wrote: "We do not have any problem with you not wearing hijab or drinking beer. Our problem is that you... take the Iranian people for a fool!"

In the immortal words of J.R. "Bob" Dobbs: "I don't practice what I preach because I'm not the kind of person I'm preaching to."

This poor kid. He ordered a part for his video game console, but the mail order company screwed up and sent him a bong by mistake and he had to open the box under the watchful eye of his mother. Kid: “It looks like a big plastic… metal… vase. It’s got a glass bottom… I […]

Jim Davis, creator of the lasagna-living Garfield, has finally commented on his infamous May 30, 1990 comic strip in which Garfield’s owner, Jon, appears to guzzle a cup a dog semen at a veterinarian’s office. Have yall seen this Garfield where Jon drinks dog semen? What a great comic pic.twitter.com/I522ZgtRWP — Reliable Truck (@ccchauffe) January […]