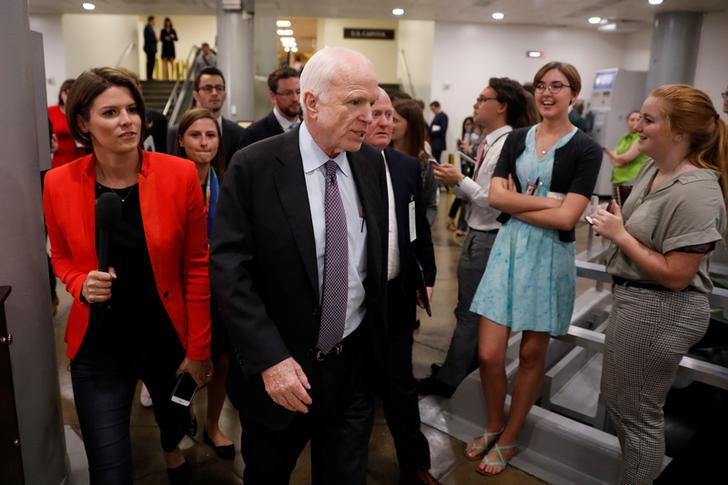 What a weird night this has been in America. GOP Senators wrote a health care bill over sandwiches at lunch, released the text at night, wouldn't answer reporter's questions about the content of the bill, then held a vote at 1am. And they failed.

McConnell: "It's time to move on" https://t.co/CKEVDMsNGO

.@SenJohnMcCain-Thank you for coming to D.C. for such a vital vote. Congrats to all Rep. We can now deliver grt healthcare to all Americans!

After 7 years of campaigning on replacing the ACA, the GOP wrote their bill over lunch, posted it at 10pm and are gonna vote at midnight.

The bill is not dead - McConnell just returned it to calendar.

On the Senate floor, @SenatorTimScott gets hit by a reporters notebook that feel from the gallery above: pic.twitter.com/qmpyX4ZEdA

A picture is worth a thousand trillion words. #HealthCareVote pic.twitter.com/S6J3ttWhrQ

Mcconnell takes bill OFF the Floor. This is a huge defeat for @SenateGOP.

Press will focus on McCain, but don't forget - they tried to bribe Murkowski with truck of pork for Alaska and she still said no. Integrity.

It's rare to see McConnell on the losing end of a fight. He seems rather stunned.

MCCONNELL: "IT'S TIME TO MOVE ON"

McConnell, teeing up next item on Senate's agenda, tells chair, "Now, Mr. President, it's time to move on."

Thanks to Lisa Murkowski, Susan Collins and John McCain for showing such strong leadership tonight.

Here's the moment the crowd outside the Capitol learned Republicans didn't have the votes. pic.twitter.com/vawKkdygoY

I ran into John McCain as we walked underground to the Senate for the final vote. Someday I'll get to tell my grandkids what he said to me.

don't write a mccain-is-a-maverick story w/o acknowledging that murkowski/collins were the principled no votes from the jump. goodnight

LISTEN LIVE OUTSIDE SENATE CHAMBER. Qstns w Senators after that wild healthcare vote. (Audio only bc of Sen. rules.) https://t.co/TXKaYXb9Wr

Three Republicans joined the Democrats in voting “no” on “skinny” repeal. See how your Senator voted: https://t.co/rsgWoz02zA pic.twitter.com/he0905CqeS