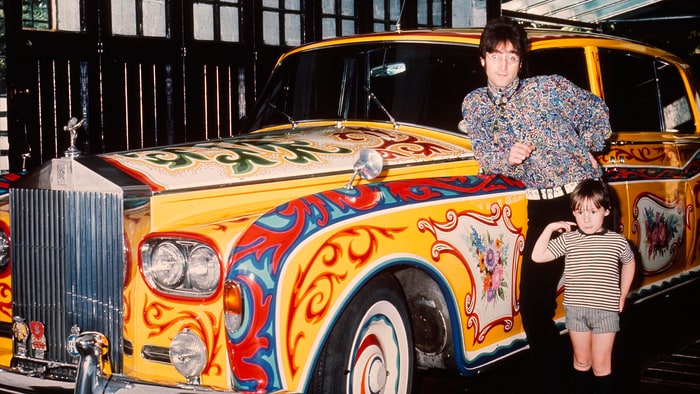 In 1967, John Lennon tooled around London in a Rolls-Royce Phantom V personalized with a psychedelic paint job. After years traveling around to various US museums, the car recently returned to London for a new Rolls Royce exhibit at Bonhams. Rolling Stone's Jordan Runtagh tells the story of the trippy whip:

Exactly how Lennon decided on the lurid Romany floral/zodiac hybrid is subject to some debate. Anthony recalls Ringo Starr planting the seed of the idea during a drive in early 1967. "We were passing the fairground one day and they were admiring the fairground decorations and gypsy caravans. Ringo said why not have the Rolls painted the same way. John thought it was a great idea." However, others say the idea was suggested by Marijke Koger of the Dutch design collective the Fool – who would also paint Lennon's piano that summer – after Lennon commissioned a refurbished 1874 gypsy caravan as a present for his young son, Julian. Either way, the chance to indulge his eccentric taste, while simultaneously delivering a massive "V-sign" to the staid British high society, proved too tempting to resist.


Doubtful that Rolls-Royce themselves would ever submit to such a drastic makeover of one of their prized vehicles, Lennon paid a visit to private coach makers J.P. Fallon Ltd. in Chertsey on April 8th, 1967, to discuss the design. After spraying the body of the car yellow, local artist Steve Weaver was tasked with painting the red, orange, green and blue art nouveau swirls, floral side panels and Lennon's astrological symbol, Libra, on the roof. On May 24th, Weaver submitted an invoice for 290 pounds, and the following day the car was ready for pickup...


Delivered days before the Sgt. Pepper's Lonely Hearts Club Band was issued, its official maiden voyage took place on May 28th, leading a fleet of friends to Epstein's new country home for a combined album release party and housewarming. Lennon somehow managed to cram in the back with eight others: his wife Cynthia, George Harrison and his wife Pattie, Koger and fellow Fools Simon Posthuma and Josje Leeger, as well as Derek Taylor – the Beatles' former (and future) press officer who had just flown in from Los Angeles for the event – and his wife Joan. All but the visiting Taylors were decked out in colorful silk and satin garb adorned with flowers, bells, scarves and amulets. Led by balloon bouquets tied to sign posts to guide the way, the friends sipped LSD-laced tea and played Procol Harum's gentle psychedelic lullaby "A Whiter Shade of Pale" endlessly on the record player.

In a year of old-school dystopian catastrophes, here’s one that’s refreshingly futuristic: the UK is making it legal to use small electric scooters on Britain’s roads, but not your small electric scooters. You must rent them, not own them. It is expected to recommend that helmets be worn, although they will not be mandatory, and […]