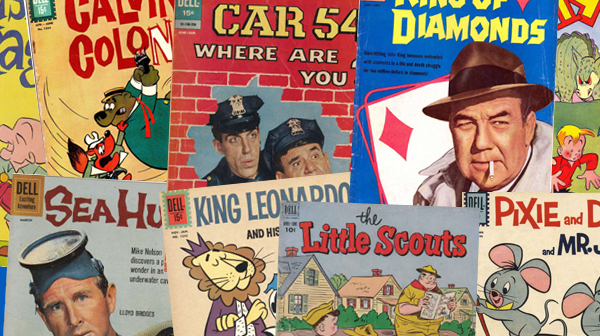 The Comic Book Plus site has an unbelievable trove of over 33,000 Golden Age and Silver Age comics books, scanned and ready to be read in full. Once you get drawn into it, it's like you're a kid sitting on the floor, surrounded by piles of rare and amazing comic books you'd never imagined you'd ever get to read.

I love the Dell comics section, particularly the Four Color series. This is a series that was published several times a month, featuring mostly licensed one-shot comics. The quality of the art and writing is surprisingly high, and the comic book versions of obscure sitcoms (Car 54, Where Are You?), cartoons (King Leonardo and His Short Subjects), adventure shows (Sea Hunt), and tons of other material are fascinating and hilarious (intentionally and otherwise).

Where else would I have discovered King of Diamonds, a comic book based on a short-lived TV show about detective John King (Broderick Crawford) who ONLY takes cases involving the recovery of stolen diamonds? The guy is weirdly obsessed. And he's a comic book hero who looks like this:

I have no comment on the site's claim that all the comic books on the site are in the Public Domain, except to say that it's so obviously in everyone's interest that these comics are made available for people to see, and no one's economic interests are harmed in the least.