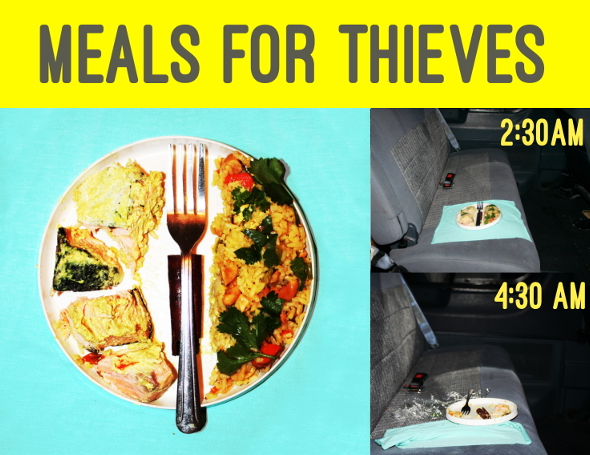 Bay Area artist Richie Rhombus has been leaving hot meals on the front seat of his unlocked mini-van and quietly hiding in the back. When a food "thief" comes around to eat the home-cooked dinner, Rhombus eats with him, but secretly.

Now here’s the fun part: So since this is a meal that doesn’t stay good long in open air, I wanted to have an experience that could happen within a couple hrs. So I sealed the dish in plastic wrap & left the side-door open. I also wanted to share the meal with the person without them knowing I was there, so I made a trap-door hidden area in the van, where I hid, with an identical meal, waiting for them to arrive.

...One set of footsteps stopped at the van, and after about a minute someone entered inside the vehicle at around 3:50 am... When I heard the sound of their fork hit the dish, I began eating my meal as well, together with the person. I was careful to not make any sounds, and just listened carefully while we both ate. They hit the fork against their teeth with ever bite, though no smacking sounds, chewed with their mouth closed, but several deep sniffing sounds, and deep breathing. They ate quickly, but were patient between bites. After a few minutes they sat up, and left the van.

I’m aware that I'm an artist with the creative luxury to design an experience. And this person is unknowingly involved in that experience. And through these conditions of my desire to feed and their desire to eat, we share this meal, and this space, together.

There are near misses and then there’s this guy in Oakland, California who got saved just before a subway train creamed him. Wow! BART’s humble hero saves a passenger from fast approaching train. On Sunday, November 3, 2019, transportation supervisor, John O’Connor was working crowd control at the Coliseum Station after the Raiders game when […]