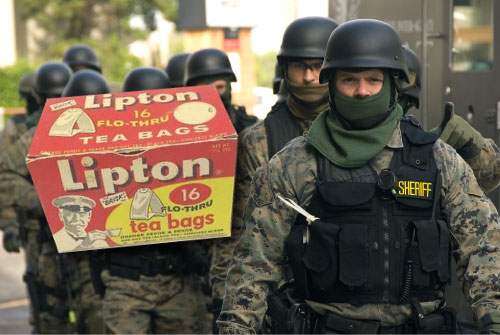 After finding wet tea leaves in a garbage can, a SWAT team in Kansas City raided a family home looking for marijuana, terrorizing the family for hours. The cops found nothing, and when the family sued, the "federal district judge who heard the case dismissed it, declaring that the police had probable cause and had acted reasonably," reports to George Leef in Forbes.

The family appealed to the Tenth Circuit:

[T]he panel of judges ruled that the district judge was in error in his dismissal. Each of the judges wrote part of the opinion, but the sizzling stuff was penned by Judge Carlos Lucero. Rarely will you find an opinion in which a judge so reams out the police for misconduct.

Judge Lucero begins, “Law-abiding tea drinkers and gardeners beware: One visit to a garden store and some loose tea leaves in your trash may subject you to an early-morning, SWAT-style raid, complete with battering ram, bulletproof vests, and assault rifles. Perhaps the officers will intentionally conduct the terrifying raid while your children are at home, and keep the entire family under armed guard for two and a half hours while concerned residents of your quiet, family-oriented neighborhood wonder what nefarious crime you have committed. This is neither hyperbole nor metaphor – it is precisely what happened to the Harte family in the case before us.”

At no step in this investigation, the judge continues, was there any probable cause, “Not at the garden shop, not at the gathering of the tea leaves, and certainly not at the analytical stage where the officers willfully ignored directions to submit any presumed results to a laboratory for analysis.”

Summing up this astounding case, Judge Lucero states, “The defendants caused an unjustified governmental intrusion into the Hartes’ home on nothing more than junk science, an incompetent investigation, and a publicity stunt. The Fourth Amendment does not condone this conduct and neither can I.”

US journalist describes being interrogated by US Customs at airport

When Rolling Stone contributing editor Seth Harp flew home from Mexico, Customs officials at the Austin airport detained him for secondary screening. He was told that he had to comply with a thorough search of his phone and laptop or he wouldn’t be allowed to enter the US. In retrospect, I was naive about the […]

Parking enforcement officers who mark car tires with chalk are guilty of violating the 4th Amendment, according to a new ruling by a federal appeals court. The three-judge panel likened the practice to that of police attaching a GPS device to a car without the driver’s consent. Orin Kerr, a law professor at the University […]