Have you seen this ugly clown sweater? 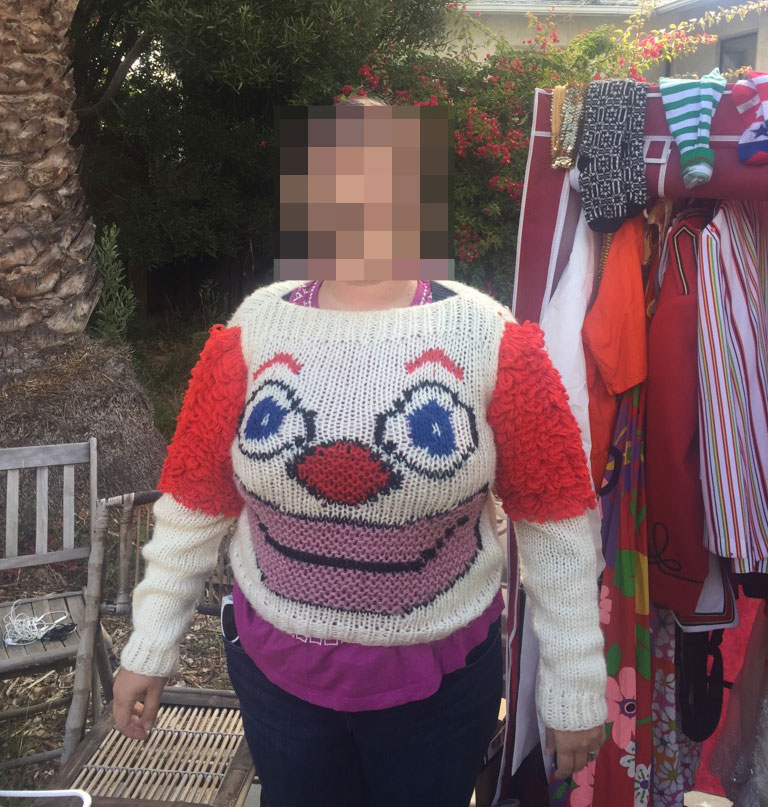 These clowns I know were having a yard sale Sunday, so I swung by. I picked up a sweet plumed marching band hat, a pair of tinted goggles for Burning Man, and a really cool long cloak, also for the desert. While shopping, I spotted this smiling clown face sweater in the rack of multi-colored clothes.

I recognized it immediately.

Wil Wheaton had once (famously) wore one just like it.

That's a friend of mine in the lead picture (who wanted to remain anonymous, for reasons). At the sale, she tried the 100% acrylic monstrosity on with little to no intention of actually buying it. In fact, as she was pulling it over her head, she mumbled a couple times, "I'm no clown. I'm no clown." I took a photo of her not being a clown, because.

When I got home, I posted the photo on Facebook and people wanted to know if I had bought it. I hadn't.

One friend wondered if anyone we knew was involved in The Clownsweater Project which has many photos of people wearing a clown sweater, just like the one at the yard sale. Another friend, Valerie, piped in, "Me!" and shared this photo of herself. In fact, the sweater that she's wearing is the exact same one that Wil wore:

I then started reading up on The Clownsweater Project. I was happy to discover that they've shared its entire history, including Wil Wheaton's part in it on their site:

In 2002 at another EFF Fundraiser at the DNA Lounge in San Francisco, Barney (yes, the purple dinosaur) and Wil Wheaton were pitted against each other in a boxing match...

This was where the Clownsweater and Wil Wheaton were introduced. Though that magical evening was the only time the two of them ever met, neither can deny the deep, enduring connection that persists to this day.

(Cory actually blogged about that match here on Boing Boing.)

All this got me wondering, who else has been touched by a clown sweater, identical to this one?

How many of these sweaters are there? Do you have one? Where did you find it? How much did you pay for it? What size is it?

Ok, so what happened to this particular sweater, the one I spotted at the yard sale?

Well, when I first posted the photo on Facebook, a friend in Ohio commented that she loved it and that she'd "wear the sh*t out of it." So, I did what anyone would do, I drove back to the yard sale and bought it for her for five bucks.

She promises to take pictures.

P.S. Check out this miniature version. And don't miss the t-shirt version.