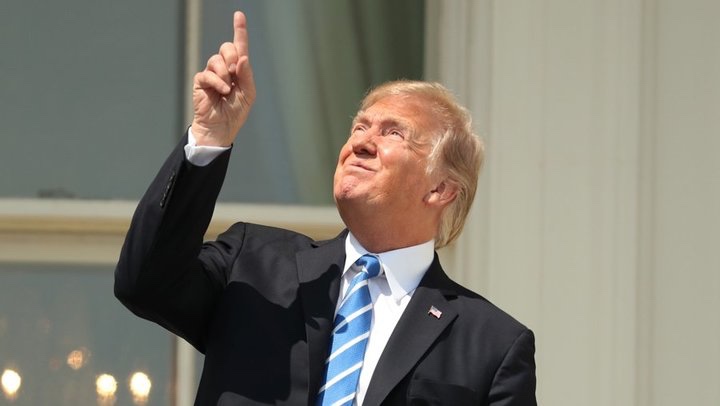 Yup. He really did.

That's why he impulsively decided to ignored scientists' and doctors' warnings, and took off his eye protection glasses while viewing a total solar eclipse today. The astronomical event was a rare opportunity for people in the United States to see a total eclipse, as a swath of the country from Oregon to the Southeast allowed great viewing opportunities.

“Don't look,” an aide shouted at him.

Will he suffer lasting retinal damage?

id say theres about a 50% chance this happens later pic.twitter.com/dQ1zqZWxqv

As he did this, someone in a crowd of aides below shouted "Don't look." pic.twitter.com/dtfSLEzcAZ

I'm pretty sure this picture sums up our president #SolarEclipse2017 pic.twitter.com/pW5aZ4elpu

Aaaaaand here's your photo of Trump looking straight at the eclipse pic.twitter.com/5vv6sVTDIl

This guy who just looked at the sun without glasses will be giving an address on the US strategy in Afghanistan tonight. pic.twitter.com/ERkbd3OmRQ

Aaaaaand here's your photo of Trump looking straight at the eclipse pic.twitter.com/5vv6sVTDIl

this is exactly the kind of change America was promised https://t.co/PmZota3dEE

Is this man just allergic to doing things correctly pic.twitter.com/D9VUYtwuO2

"Melania, how long till I become Daredevil?" pic.twitter.com/V0UptXD8Ux

Des is right. Conflating courage with just doing dumb shit that accomplishes nothing but that people told you not to do is the motif. https://t.co/LQfyQVvEOK

"I have a very good brain."

I was totally unprepared and live well ⬆️ of totality, but I pointed a colander at the ground and it looks like this so A+ given the effort pic.twitter.com/Ov4s5yCZgl