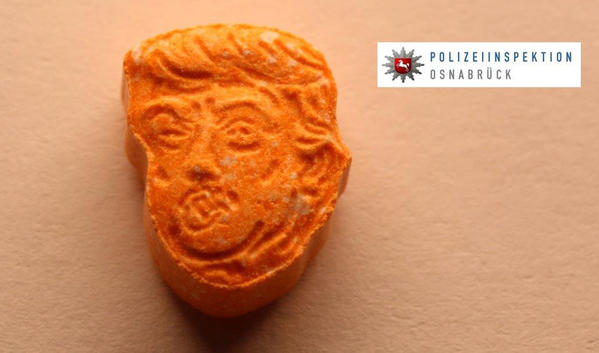 Police in Germany claim to have seized thousands of Ecstasy tablets in the shape of President Donald Trump's head. The haul of illicit MDMA is estimated to be valued at $45,900 in street sales.

Police in Osnabrueck, northwest Germany, say they found the drugs while checking an Austrian-registered car on the A30 highway Saturday.

They say the people in the car, a 51-year-old man and his 17-year-old son, told officers they had been in the Netherlands to buy a vehicle but hadn't succeeded so were returning home.

Officers said they found about 5,000 of the orange, Trump-shaped Ecstasy tablets along with a large, but unspecified quantity of cash.

A judge on Sunday ordered the father and son kept in custody. The car was seized.

Who would even take this stuff? Trump's vibe is basically the opposite of Molly. Guaranteed to have a bad roll.