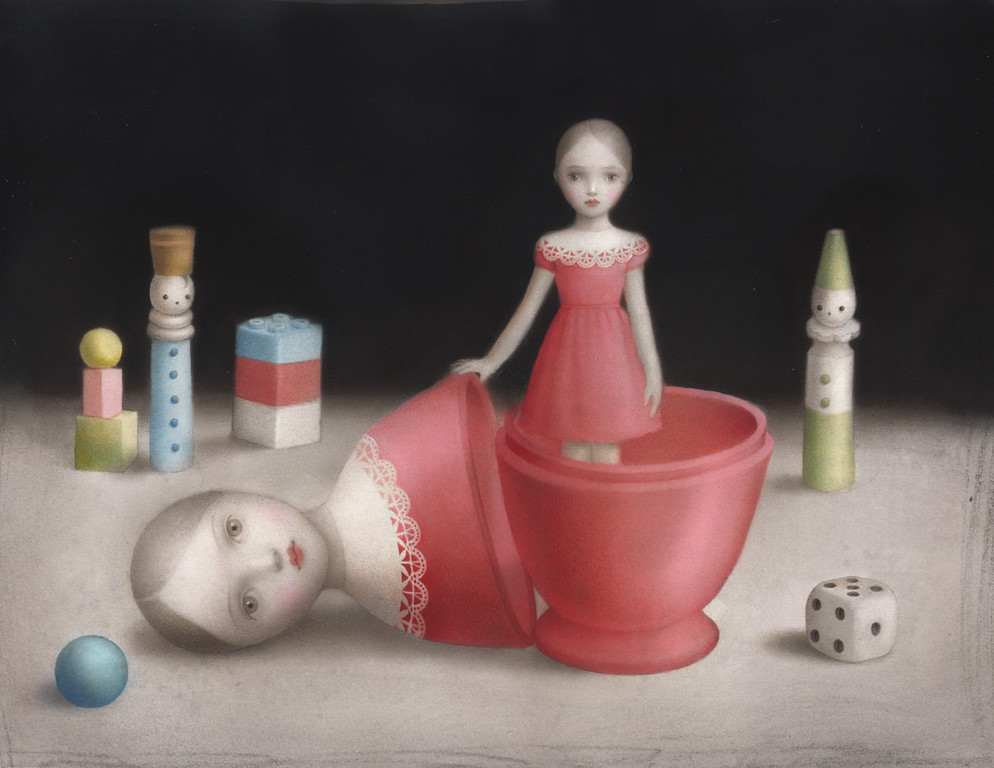 Nicoletta Ceccoli is a pop surrealist painter/illustrator from the Republic of San Marino (a microstate within north-central Italy). Nicoletta has an animation degree from the State Institute of Art in Urbino and has illustrated over 30 children’s books since 1995. She does both commercial and personal work, and has exhibited her artwork all over the world. Among many other awards, she has received a silver medal from the Society of Illustrators in New York and the Andersen Prize, “honoring her as the best children’s book illustrator in Italy.”

Ceccoli’s work depicts a world of delicate, feminine girls alongside freaky creatures in strange situations. This duality of imagery in her work is reminiscent of the out-of-this-reality type of nightmares a young child might have. Each piece of Ceccoli’s work tells its story with a cloud of mystery around it, which is up to the viewer to interpret. The titles to her work suc,h as “Ollie Ollie Oxen Free” and “Ready Or Not Here I Come” pull us even deeper into the world of make-belief. In an interview with WOW X WOW, Ceccoli explains that “Growing up I simply never stopped loving the children’s universe. Childhood remains the only magically joyful and free condition, and as adults we end up losing that. In my opinion it can only be regained through imagination.”. This love of the “children’s universe”  is apparent through Ceccoli’s ability to pull the viewer into a childlike realm of wildly imaginatory situations.

Ceccoli’s exhibit titles “Hide and Seek” is now being displayed at the Corey Helford Gallery in Los Angeles. Be sure to check it out if you’re nearby.