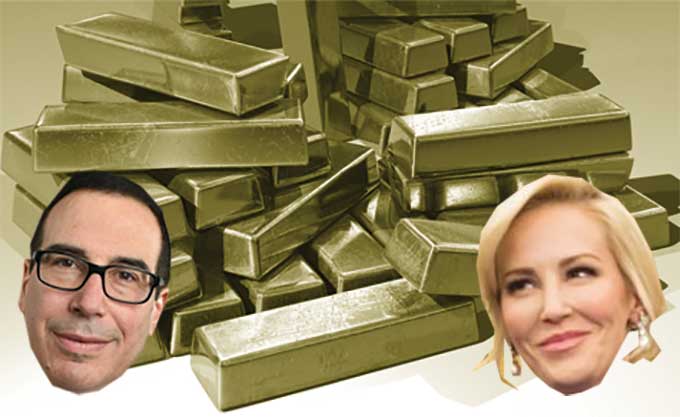 The Citizens for Ethics and Responsibility in Washington (CREW) filed a Freedom of Information Act requesting "the justification for [Treasury] Secretary Mnuchin's use of a government plane, rather than a commercial flight, for a trip that seems to have been planned around the solar eclipse and to enable the secretary [and his white savior memoirist spouse Louise Linton] to secure a viewpoint in the path of the eclipse's totality."

On August 21, 2017, Secretary Mnuchin and his wife Louise Linton travelled to Lexington, Kentucky, purportedly for the Secretary to present remarks along with Senate Majority Leader Mitch McConnell at a luncheon sponsored by the Louisville chamber of commerce, Greater Louisville Inc. Afterward, Secretary Mnuchin and his wife “headed to Fort Knox…to tour the bullion reserve at the Army post and view the eclipse.”

The requested records would shed light on the justification for Secretary Mnuchin’s use of a government plane, rather than a commercial flight, for a trip that seems to have been planned around the solar eclipse and to enable the Secretary to secure a viewpoint in the path of the eclipse’s totality. At a time of expected deep cuts to the federal budget, the taxpayers have a significant interest in learning the extent to which Secretary Mnuchin has used government planes for travel in lieu of commercial planes, and the justification for that use.

Even weirder than the eclipse is the part where Mnuchin and Linton "toured the bullion reserve" at the Fort Knox. Is that a regular duty for the Treasury Secretary, to go there with a clipboard and count the gold bars. "Yep, all accounted for Mr. President!"

Linton was in the news earlier this week for posting a photo of herself and her husband walking deboarding a U.S. government jet, commenting, "Great #daytrip to #Kentucky! #nicest #people #rolandmouret pants, #hermesscarf, #tomford sunnies, and #valentinorockstudheels."

When another Instagram user wrote, ""Glad we could pay for your little getaway. #deplorable." Linton unleashed with a sarcastic, condescending rant:

"Aw!!! Did you think this was a personal trip?! Adorable! Do you think the US govt paid for our honeymoon or personal travel?! Lololol. Have you given more to the economy than me and my husband? Either as an individual earner in taxes OR in self sacrifice to your country? I'm pretty sure we paid more taxes toward our day 'trip' than you did. Pretty sure the amount we sacrifice per year is a lot more than you'd be willing to sacrifice if the choice was yours. You're adorably out of touch. Thanks for the passive aggressive nasty comment. Your kids look very cute. Your life looks cute. I know you're mad but deep down you're really nice and so am I. Sending me passive aggressive Instagram comments isn't going to make life feel better. Maybe a nice message, one filled with wisdom and hunanity [sic] would get more traction. Have a pleasant evening Go chill out and watch the new game of thrones. It's fab!"