Underwear-clad man outside of courthouse with sign: "Return my bong" 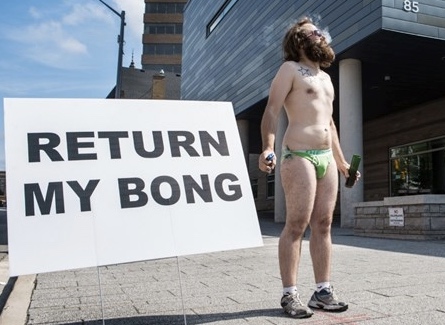 Jeffery Shaver, 31, stood outside the Kitchener, Ontario courthouse yesterday in his underwear beside two signs that read "RETURN MY BONG" and "RETURN MY MARIJUANA." He claims that police seized his bong and stash at a local hospital where he was taken during a panic attack. He says he was yelling about a problem with a vending machine when they arrested and searched him. This is the second time one of his bongs and his weed were confiscated. From The Record:

"I have a legal medical marijuana card. Five months after I got it, I was arrested for possession of marijuana, but I had my card on me," Shaver said.


"So two days later, I went back and smoked marijuana on the front lawn of the police station," Shaver said. "Again they arrested me. I went to jail for the first time. They held me there for 16 hours.


"And that charge, ironically, has already been dropped and this is the very bong they returned to me," he said, pausing to take a hit off the bong. "They refuse to return the other one because they haven't dropped that marijuana charge."