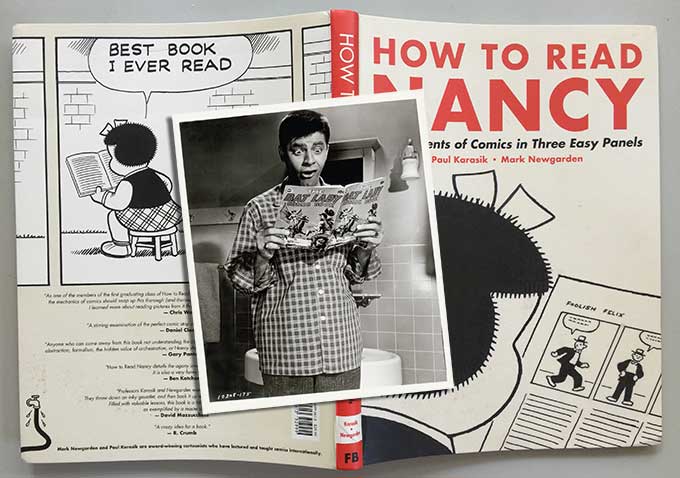 By Paul Karasik and Mark Newgarden

The next afternoon the phone rang.

“Hello?” came the unmistakable voice. “This is Jerry Lewis and I would be honored to write a foreword for your book.”

Only hours before; with zero expectations, we had dropped our (then-slender) draft into a Fed-Ex envelope with a brief query. Might Mr. Lewis kindly consider writing a Foreword for How To Read Nancy?

And now, here was the King of Comedy, enthusiastically consenting.

The snappy talking-point for How To Read Nancy (due this fall from Fantagraphics Books) is that “everything that you need to know about reading, making, and understanding comics can be found in a single Nancy strip by Ernie Bushmiller from August 8, 1959.”

Our backgrounds are as cartoonists and educators, and our short 1988 essay on this topic took on an extended second-life in comics curriculums around the globe. When it was time for a book-length expansion, we naturally sought an introduction by a serious scholar to lend credence to our book’s seriously improbable conceit. Luckily art historian and critic, James Elkins, the author of such books as How to Use Your Eyes and The Object Stares Back was intrigued. Professor Elkins has devoted a lot of serious thinking to the benefits of deep-reading visual texts and helped frame How To Read Nancy in a thoughtful, scholarly and substantive Introduction, replete with footnotes, photographs, and maps.

When it came to the perfect counter-weight to provide a foreword we looked no further than that original essay. In it we compared the skill-set of our subject to such venerable 20th century funsters as Mack Sennett, Jacques Tati and... Jerry Lewis.

Our mission seemed clear, though fraught with peril. With any number of show-biz friends who had survived close encounters (and semi-sustained relationships) over the years with the late, great Mr. Lewis, we were aware of the inherent risks. Pussycat one day, tiger shark the next.

Illustrator Drew Friedman, “the Vermeer of the Borscht Belt”, who managed to perpetually remain on Lewis’s good side, provided us with a Las Vegas office address and a terse warning; “Don’t expect a reply. Jerry is a busy man and gets this kind of request all the time.”

But his call confirmed it: Jerry Lewis was a long-time Ernie Bushmiller fan. Exhale. Of course he was. Our suspicions had been validated. Both Lewis and Bushmiller were famously demanding, obsessive experts on the complex structures and hidden mechanics behind the production of the most seemingly “simple” kind of visual humor. In other words, they were both serious gagmen. Lewis enjoyed a celebrated collaboration with cartoonist/director Frank Tashlin. Cartoonist Bushmiller crafted gags for Harold Lloyd, one of Hollywood’s golden triumvirate of silent clowns. And the icing on the cake: both men had become “love-them or hate-them” 20th century icons in their own lifetimes. Our choice was clearly kismet.

Halfway through that fateful conversation, we admitted that we still could not believe that we were speaking with the REAL Jerry Lewis. “Oh, believe me, I’m real,” said Lewis, “This morning I got outta bed and looked in the mirror and there was Jerry Lewis. And he said, “Call those guys and tell them you’ll write that foreword to How To Read Nancy!”

We were floored. Not only was Jerry Lewis going to write the foreword to our book, but he promised to deliver it by the end of the week!

We ruminated further for weeks, shooting emails back and forth under the subject line of “NOW WHAT?” Should we suck it up, thrust out our chests, bravely phone Jerry Lewis and politely request delivery of his overdue How To Read Nancy foreword? No. No. Not in one million years, no. We eventually opted to do what any desperate supplicants would do in such a dire situation: butter-up Penny.

On the phone, Penny, sounded as though she might be Lewis’ senior. Evidently, she had been at Jerry Lewis Productions in Las Vegas for decades. She was the guard at the gate to the Great Man and the keeper of the key. Perhaps Penny recognized a certain agony in our voices and gave us a solid “I’ll see what I can do.”

“NOW WHAT?” became our new part-time job within a job, within a job. This included strategizing the intervals between calls to Penny, friendly Penny nudges and ritual offerings of local artisanal chocolates and elaborate handmade thank-you-Penny cards.

The plain yellow envelope from Vegas arrived roughly six months after that first phone call. Inside was a signed photograph of Jerry Lewis and a single paragraph, typed in all-caps.

In part, it read:

This was Jerry at his Jerry-est, turning the foreword to a book into a joke. Unfortunately, this was our foreword, our book, and the joke was on us. What we needed was Jerry Lewis, the Total Film-Maker, the master craftsman and incisive connoisseur of “le gag” — and instead we got Jerry Lewis, The Nutty Professor.

The reality of being so close, with so much spent effort and still without a single usable word for our long past due Foreword felt utterly inconceivable. Further delays were certain to test our publisher’s already well-tested patience.

But...how does one ask Jerry Lewis for a rewrite?

Again, we turned to Penny. We thanked her profusely for typing up and forwarding the (utterly useless) foreword. We sent her notes. We sent her flowers. We sent her a homemade jar of beach plum jam from beach plums that Paul had personally picked and personally jammed. And THEN we called her once, twice, thrice, and begged. Might she be willing to sidle up to Le Roi du Crazy on our behalf and whisper in the royal ear a special request for one thing, just one nice, specific about Nancy, Ernie Bushmiller or our book?

And then we waited. And waited.

A rewrite came. It was even shorter than the first, but the Gods of Humor Theory smiled down on us that day. We finally got Coherent (if not Serious) Jerry and as such, it appears in our book...all three sentences of it.

We forwarded more gifts to both Jerry and Penny and called to thank him, personally. We got Penny on the phone. “I’ll tell him you liked it,” she said, “JL’s a very busy man.”

Thanks Jerry, and rest in peace.

Enjoy this sample from How to Read Nancy: The Elements of Comics in Three Easy Panels, by Paul Karasik and Mark Newgarden. Foreword by Jerry Lewis. Published by Fantagraphics.

I haven’t read newspaper comics in years, and I was surprised that Nancy is still around. Yesterday’s strip was about computational propaganda. I like the image of Sluggo as a bot and would like it in a T-shirt. The 123 comments on this particular strip are lively. Here are a couple of examples: I don’t […]

He’d come in third in a two-horse race

My failed attempt to draw the Nancy comic strip

Nancy is a harsh taskmaster; resuscitating it was a grueling task, but the challenge was invigorating and edifying. By drawing Nancy, I realized that every character (even the environment) in a strip is the cartoonist and is invested and imbued with the cartoonist’s life force.