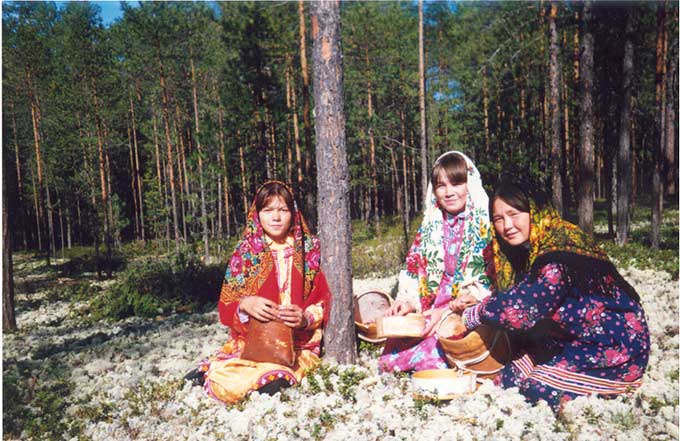 I've known since I was fourteen that one day I'd write a novel entitled Madness Treads Lightly. What it would be about, I had no idea. It was a one-of-a-kind event: a title popping up all by itself, before any plan, plot, or heroes, and long before I could bring myself to write fiction.

For years, that mysterious combination of words -- "Madness Treads Lightly" -- would give me no rest. It became a kind of piggybank where I tossed coins, especially small change: brief street scenes, snatches of conversation. Sometimes I would divine the features of my future characters in friends and strangers.

It was easy for me to write poems and fill notebooks with drafts of the novel. It took no effort at all. I would write a page or two, cross it out, start over, and so on, ad infinitum. It all seemed so banal and boring. I wanted the plot to begin far from Moscow and my usual world, somewhere in Siberia.

What I knew about Siberia was that it had a completely different sense of space and time. Siberia had never known serfdom, that is, several generations had grown up free men, with a sense of their own worth. But it had known hard labor under the tsars, and the prison camps under Stalin were the most monstrous form of slavery, humiliation and cruelty. The beauty of wild nature there combines with the squalor and filth of daily life, human nobility with baseness, and all this is more vivid and sharper and full of more contrast than in the temperate central zone.

Traveling through the Soviet Union as a private person was fairly difficult to do. Huge lines formed for train and plane tickets. In the hotels, even if all the rooms were available, there was always a sign at the reception desk: "No rooms available." They only housed people who had official travel vouchers.

Naturally, there were brave souls prepared to head for anywhere they pleased, with their tents and backpacks, to canoe down rivers, spend their nights in the forest, wash in icy water or not wash at all for weeks on end. I had a healthy appreciation of my own physical capabilities and realized feats like that were beyond me.

I came up with a couple of other plots that didn't require Siberia -- Moscow was enough -- but I was constantly catching myself mentally returning to "Madness Treads Lightly." The hero would have to be a poet. I didn't know anything about him yet, but he was already writing my poems. I had the strange feeling that certain events in my life were happening on purpose, to become part of my novel.

In the Soviet Union, there was something called the Bureau of Propaganda, which was part of the Union of Writers. Two female employees, a bookkeeper and typist, sat behind desks in a very old mansion in the middle of Moscow, in a small, stuffy room once used by the servants of the home's former owner, Prince Svyatopolk-Chetvertinsky. The office interior was decorated with potted cacti, portraits of Lenin and Gorky, and candy boxes featuring the Kremlin towers and rosettes. An electric kettle boiled away, and a typewriter clacked. Like millions of Soviet office workers in hundreds of thousands of Soviet offices, the inhabitants of the stuffy office drank tea for days on end and ate the chocolate bonbons you were expected to give to minor officials for minor services.

I doubt the Bureau of Propaganda's employees did anything involving propaganda. They organized trips for Literary Institute students through the boundless expanses of the Soviet Union and issued travel vouchers and money. For a box of candies, they could render an additional service: sending phone telegrams to Bureau branch offices in the towns on your itinerary so that they would reserve rooms for you in the hotel and arrange your appearances in advance.

I'm grateful to the Bureau's employees for the fact that, when I finished my first year at the institute, right after the summer session, they sent my classmates and me on a trip from Tyumen to Tobolsk to Khanty-Mansiysk. I'm also grateful that neither I nor my classmates brought the traditional box of chocolates to the bureau. Naturally, we thought about it, but a good box was expensive and a crummy one was embarrassing to give. In the end, even without chocolate or phoned telegrams, our trip turned out amazingly and filled my "Madness Treads Lightly" piggybank with genuine treasures.

In Tyumen they weren't expecting us and didn't know what to do with us, so they sent us straight to Tobolsk. There was no Bureau branch in Tobolsk, but there was a Young Communist municipal committee, which didn't know what to do with us, either, so they sent us on to Khanty-Mansiysk, where we were met by the chairman of the local section of the Union of Writers and taken to a drilling site by helicopter.

Deep in the taiga there were several trailers in which the oil workers lived. Swamp underfoot. You could only move around over narrow plank walkways. When the helicopter landed, I jumped out too soon, not waiting for the blade to stop, and was blown off the walkway in my sandals and summer dress. Up to my knees in mud and plastered with mosquitoes, I did not immediately appreciate the Siberian taiga's majesty.

It was hot, around 30 degrees Celsius, which is 86 Fahrenheit. The oil workers were walking around in rubber boots, the men were stripped to the waist, and the women wore open t-shirts. Friendly dogs strayed calmly nearby. It was as if the mosquitoes didn't exist for those people and dogs, whereas my friends and I were covered in itchy red bites after the first five minutes. On planking near one of the trailers we saw some small puppies, our brothers in misfortune. They were whimpering pathetically, desperately rubbing their snouts with their paws.

It was the White Nights, and after our appearance, they offered to send us on an excursion through the taiga to see a camp of Khanty hunters. They issued us swamp boots, canvas trousers, jackets, and mosquito nets that lowered from the brims of our canvas hats. The nets were saturated with a saccharinely stinky liquid and tied under the chin. The net protected us from mosquitoes, but an enraged biting midge got trapped under it.

We never did get as far as the camp, but we did encounter a bear. Our guide told us to freeze. Between the trees, about twenty meters away, something enormous flashed by. I didn't get a good look at it, but I remember my strong feeling, a mixture of fear and curiosity.

Later the guide explained that encountering a bear in the summer presents no danger for man in principle. Winter is another matter. If a bear hasn't fattened up enough over the summer and wakes up hungry, he can get very aggressive. A bear like that is called a shatun. There aren't any berries or fish for him, and he's ready to eat anything that moves, including men. If that happens, he can no longer stop, and he hunts people even in the summer, when there is plenty of other food. A shatun becomes a man-eater. Human flesh acts on him like a drug. He wants more and more.

When we got back to Tobolsk, it turned out that the local Young Communists had prepared a performance program for us. They were waiting for us at the library, at the petrochemical plant's club, and at a low-security prison. Performers were supposed to come, but they hadn't, and the directors had asked them to send anyone they could find.

I remember the smell of that place. Only the smell. The faces were ordinary, nothing special. We didn't read our poems or stories there; instead, we chatted from the stage about literature and life. We had the sense they didn't care what we talked about, that they were simply relaxing, sitting in that room. Some were dozing. I stared into their faces and thought there were probably shatuns among them prepared to gobble up everything that moved. But not every shatun is doomed to be a man-eater.

In the evening, a short entry appeared in my notebook: "Human flesh is like a drug. Tobolsk. Prison. Young Communists."

I wrote Madness Treads Lightly fifteen years after that trip. Over the years I'd managed to cover nearly the whole country, to read many books on psychology, psychiatry, and criminology, and to study several serial murderer cases. I'd spoken with the investigators and officers who had caught them and with forensic psychiatrists who had studied them.

The novel practically wrote itself, in one breath, like a poem.

Dubbed the “Russian crime queen,” Polina Dashkova is Russia’s most successful author of crime novels. She’s sold fifty million copies of her books and has thrilled readers in countries across Europe and Asia. A graduate of Moscow’s Maxim Gorky Literary Institute, she has been active as a radio and press journalist and has worked as an interpreter and translator of English literature. Her books have been translated into German, Chinese, Dutch, French, Polish, Spanish, and English.

Marian Schwartz translates Russian classic and contemporary fiction, history, biography, criticism, and fine art. She is the principal English translator of the works of Nina Berberova and translated the New York Times bestseller The Last Tsar by Edvard Radzinsky, as well as classics by Mikhail Bulgakov, Ivan Goncharov, Yuri Olesha, and Mikhail Lermontov. Her most recent publications are Leo Tolstoy’s Anna Karenina, Andrei Gelasimov’s Into the Thickening Fog, Daria Wilke’s Playing a Part, and half the stories in Mikhail Shishkin’s Calligraphy Lesson: The Collected Stories. She is a past president of the American Literary Translators Association and the recipient of two National Endowment for the Arts translation fellowships, as well as prizes including the 2014 Read Russia Prize for Contemporary Russian Literature and the 2016 Soeurette Diehl Frasier Award from the Texas Institute of Letters.

I would have completely lost it.

Gregory Kaczor had a lifelong dream to skate across Lake Baikul, and he made this lovely documentary of his travels. It’s cool how he uses chunks of ice to secure the tent, and the clarity of the ice and water below is something to behold.

The Gulf of Ob is a remote Siberian reach of the Russian empire, and its beaches are covered in gigantic snowballs up to a meter across. The BBC reports that they’re the result of a “rare environmental process where small pieces of ice form, are rolled by wind and water, and end up as giant […]