These rusted metal discs were made to look like Mars 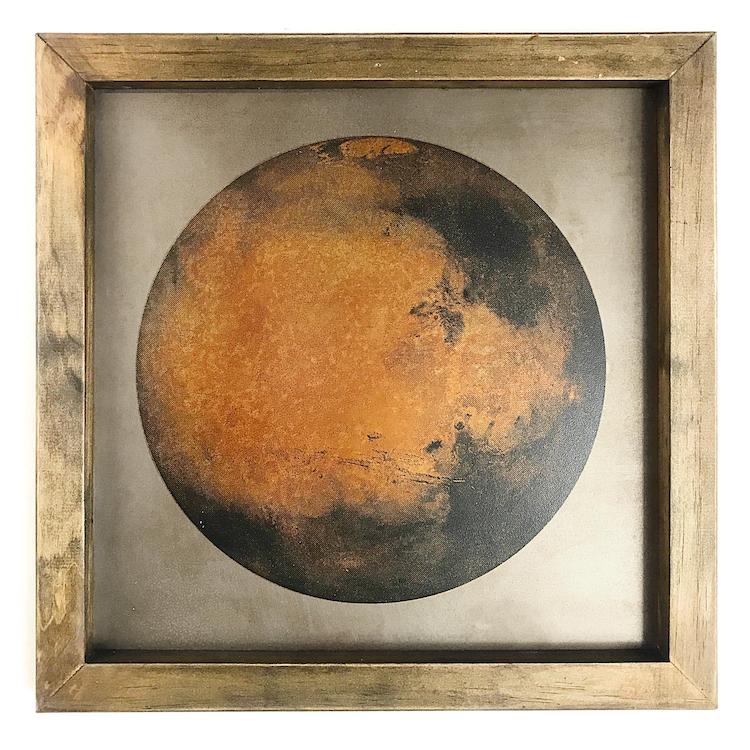 Maker Barry Abrams has been oxidizing steel discs to make them look like Mars. It's a multistep undertaking that incldes a black screen printing process and yields a cool result.

The planet Mars is covered in rust. Scientists think that at one time, Mars could have been a lot like earth, but when it lost most of its atmosphere, the ancient volcanos blew out all of the iron in its center and spread it all over the planet, rusting the surface. This print is on sheet metal, where the rusty red color is actual rust on the metal, and the black is a screen printed ink. A few years ago, I researched a process for rusting a piece of sheet metal quickly. With two household chemicals (muriatic acid and hydrodgen peroxide), I could force steel to rust in about 30 seconds, and when I applied a vinyl mask to the sheet before using the chemicals, I could control what parts of the metal got rusted. I didn't know if I could screen print on top of the rusted metal and have it cure. Turns out, with the help of a heat gun, I totally can. The print is about 12"x12". #art #design #handmade #illustration #graphicdesign #poster #handcrafted #print #typography #prints #screenprinter #screenprinting #printing #printmaking #goodtype #makersgonnamake #silkscreen #printshop #gigposter #halftone #space #planet #astronaut #nasa #amazing #spaceexploration #mars #science #chemistry

Check out his site for more info.

There's some video of the hydrogen peroxide doing its thing at the Instagram post above, so check it out!