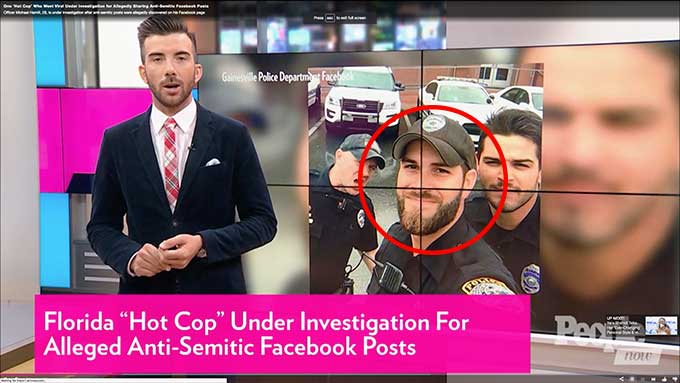 Gainesville, Florida Police Officer Michael Hamill loved it when his handsome face went viral. That's why it's so baffling that he closed his Facebook account just as his popularity was peaking. Oh, wait, maybe it's because Officer Hamill posted on Facebook about his desire to have Jews and "stupid people" placed in concentration camps and ovens.

From the Gainesville Sun:

One screenshot is of an April 2013 post, in which Hamill writes: “Who knew that reading jewish jokes before I go to bed would not only make me feel better about myself but also help me to sleep better as well. Here is one for everybody, “What’s the difference between boy scouts and jews?” Anybody know? Well it is because “Boy scouts come back from their camps.”

In another screen shot from a 2011 post, Hamill writes: “so I find it funny that people will talk about how our government needs to do something about our economy and in reality it’s YOU who needs to stop taking advantage of our system and get a life and do something with your life. Gotta love reality when it hits you in the face. Stupid people annoy me. Put them in an oven and deal with them the Hitler way. Haha.”

Hamill told TIME on Wednesday, before news broke about the alleged Facebook posts, that he was shocked by the newfound attention.

“I’ve never had this much attention before,” he said. “It’s an ego boost — very flattering and funny.”

Hamill, who got married last March, said his new wife initially did not enjoy his turn in the spotlight. “My wife, she obviously wasn’t happy at first, but she’s taking it like a champ,” he said.

The U.S. Department of Transportation (DOT) is seeking to ban emotional support animals from airplane cabins, reports Roll Call. Under the proposed rule, only specially trained dogs that assist disabled people would be permitted on planes. From Roll Call: The rule comes amid a spate of high-profile stories of airplane passengers trying to bring support […]