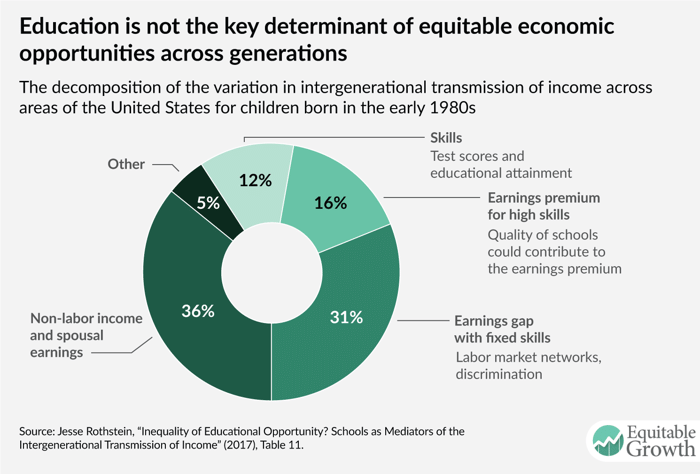 America's great stagnation includes a hardening of class divisions, with fewer and fewer poor and working class people raising children who rise to the middle class or even the one percent -- a fact that strikes at the heart of the cherished American notion of rags-to-riches meritocracy where you rise to prominence on the basis of your contributions to society, not the accident of your birth.

The establishment consensus is that can be solved with improved access to high-quality education -- something that is a good in and of itself, regardless of its effect on class mobility -- but the research doesn't bear this out.

Multiple studies show that economic prosperity is much more strongly correlated with the circumstances of one's birth -- for example, being raised around a lot of rich people -- than it is with your education. A Stanford study included education as just one of five factors that correlate with economic mobility: "segregation, family structure, income inequality, local school quality, and social capital."

In Inequality of educational opportunity? Schools as mediators of the intergenerational transmission of income, a paper by UC Berkeley economist Jesse Rothstein, we get a clearer picture still of the correlates to economic mobility: "higher minimum wages, the presence and strength of labor unions, and clear career pathways within local industries."

Rothstein is quick to say that his new findings do not mean that Americans should do away with investments in school improvement, or even that education is unrelated to improving opportunity. Certainly the more that people can read, write, compute, think, and innovate, the better off society and liberal democracy would be. “It will still be good for us if we can figure out how to educate people more and better,” he says. “It might help the labor market, our civic society, our culture.” But Americans should be more clear, he says, about why they are investing in school improvement. His research suggests that doing so in order to boost a child’s chances to outearn their parents is unlikely to be successful. According to Rothstein, education systems just don’t go very far in explaining the differences between high- and low-opportunity areas.