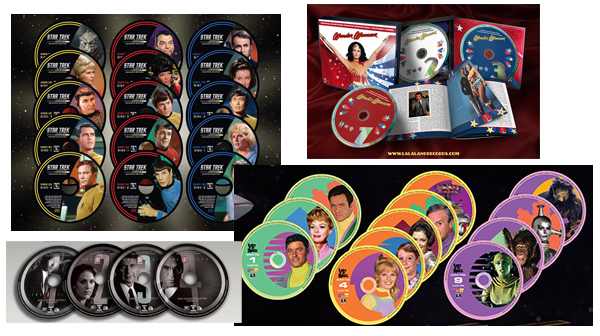 I just came across this amazing company, La-La Land Records, that releases soundtracks of movies and TV shows.

But they don't just release ordinary soundtracks, like their score to the new movie Kingsman: The Golden Circle. They also produce obsessively researched and mind-bogglingly complete soundtracks for older properties.

For example, they offer a 3-CD set for the Henry Mancini soundtrack to the 1965 movie The Great Race, which must have a running time longer than the movie itself.

But it's on televisions series that they really shine. The Star Trek: The Original Series soundtrack is a 15-CD monster that will set you back $224.98. The complete DVD set for the series (which includes music and dialog and moving pictures) only costs $39. The La-La Land soundtrack set is beautifully packaged, and includes such tracks as "Zap the Space Ship" and "Mudd's Farewell/Back in Orbit"

If you love the incidental music from the TV show Lost In Space, you are really in luck. Their 12-CD set contains over 14 hours of musical interludes like
"A Running Start / Never Fear / Zeno's Plan", and includes a 104-page booklet.

This stuff is not for me; I couldn't even make it through the end of one of those sample tracks. But I'm strangely glad this stuff exists. Some might call this music entertainment detritus, but others clearly love it, and for them and for posterity, it's been expertly curated, cataloged and archived.

Flash Gordon (1985) is a fantastic and camptastic film thanks in no small part to Queen’s wonderful soundtrack. Above is Queen’s unreleased promotional video for “Flash.” Stick around ’til the end for a Klytus cameo.

This lovely cover was heard in the seventh episode of the new Watchmen TV show, titled “An Almost Religious Awe.” The track will appear on Reznor and Ross’s album “Watchmen: Vol. 3 (Music from the HBO Series)” due out December 16.