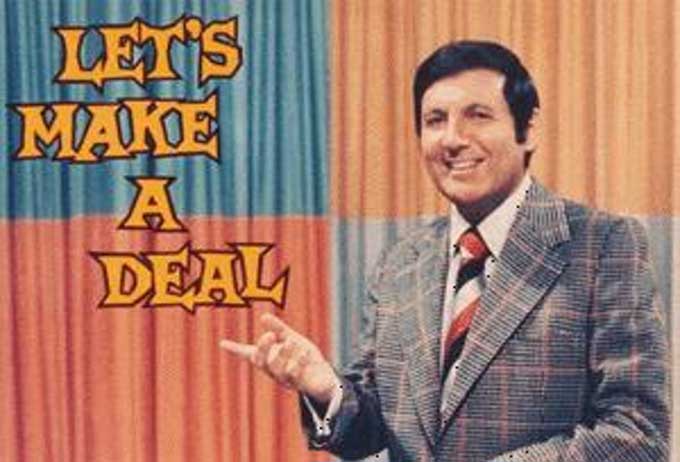 I remember watching Let's Make a Deal on our family black-and-white TV set when I was six years old. To me, Monty Hall was in a tie with Danny Kaye as being the coolest, nicest, smartest person in TV land. He had the best job in the world -- giving money and prizes to people dressed up as clowns, scarecrows, and robots. The great thing about Let's Make a Deal was that anything could happen, and it often did. There seemed to be no script. The show teetered on the precipice of anarchy, with Monty's energetic patter keeping the show moving ahead. Every episode had surprises. My favorite part of every episode was the last few minutes when Monty would make lighting deals with the proto-cosplayer contestants. I remember one time he told a contestant he'd trade her a dollar for every nickel in her purse. She pulled out a mason jar filled with them.

This weekend, Carla and I are thinking of our dear friends Sharon Hall and her husband Todd on the passing of this creative, generous man who touched millions of people through his entertaining TV shows and good works.

“Monty had to be a very likable con man; he had to convince people to give up a bird in the hand for what’s in the box,” David Schwartz, the author, with Fred Wostbrock and Steve Ryan, of “The Encyclopedia of TV Game Shows,” said in an interview.

Mr. Hall had other responsibilities, too, Mr. Schwartz added: “He had to be a traffic cop, to get a decision out of the contestant without taking a long time. With his great ability to ad-lib, he knew how to keep the show moving.”

Mr. Hall kept “Let’s Make a Deal” moving for most of almost 5,000 broadcasts on NBC, on ABC and in syndication. The show ended its original daytime run in 1976 on ABC. A concurrent syndicated nighttime version lasted until the next year. It occasionally resurfaced over the next decades and, after being off the air for a while, was revived in October 2009 on CBS, with Wayne Brady as host. That version is still on the air.

“Let’s Make a Deal” became such a pop-culture phenomenon that it gave birth to a well-known brain-twister in probability, called “the Monty Hall Problem.” This thought experiment involves three doors, two goats and a coveted prize and leads to a counterintuitive solution.

You probably know him better from his days on Let’s Make A Deal, as Monty Hall.